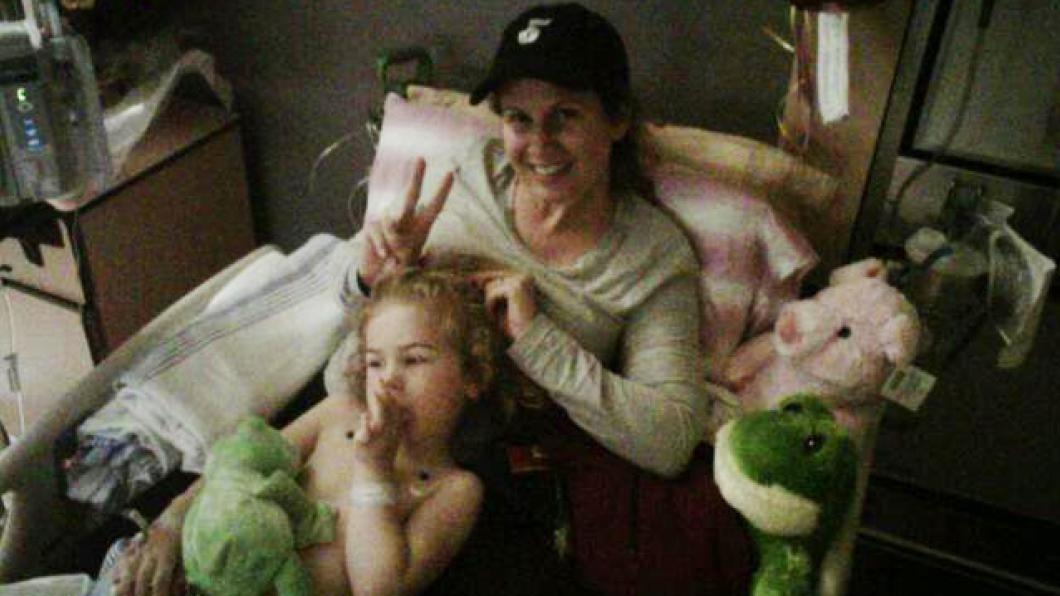 Last month we posted an interview with Zoe Gottwald (photo above), a 16-year-old who was hospitalized at Holland Bloorview after a traumatic accident in 2010. As a toddler, Zoe ran into a moving ride-on lawn mower on her grandparents' Ontario farm and had to have an amputation below her left knee. Zoe says horse riding has been an important part of rebuilding her identity. Today we hear the parent perspective from Zoe's mother Denise Roussel. We asked Denise about how she coped when Zoe was hospitalized for months at Holland Bloorview, where she learned to walk with a prosthetic leg.

BLOOM: How long did Zoe spend in hospital?

Denise Roussel: Close to nine months. She was at SickKids for five months and then at Bloorview for just over four. We almost lost that little boo at SickKids, because she was so tiny and weak. Initially they were trying to save her leg and rebuild it. We had the best of the best looking after her and they were treating her as a little guinea pig, which we agreed to. But then it got infected and I said to my husband Marc: 'No. Let's amputate and get her moving forward so we can get out of the hospital.' The uncertainty of it was terrible.

BLOOM: What was most challenging for you about Zoe's rehab at Holland Bloorview?

Denise Roussel: It's interesting, because as it got easier for me, it got harder for Zoe. I found Bloorview felt much calmer. I wasn't on pins and needles, like you are in an acute-care hospital. But the intensity of the therapy got harder for Zoe there. She was progressing, but half the time she didn't want to go to therapy. When she got there, they had so much fun. They would do age-appropriate things with her, so she didn't realize how hard she was working.

BLOOM: What was the greatest challenge for you?

Denise Roussel: Being isolated from my family, my friends, my world and my job. Zoe wasn't mobile, and I told the Bloorview nurses I wanted to be very involved in learning how to change her bandages and help her in the washroom. Cleaning her leg was hard because you're seeing something that is hard to deal with, and you're trying not to hurt her. The nurses were very good at showing me what to do and always being available. I'm glad they taught me that, because Zoe subsequently had so many surgeries and knowing how to deal with wounds was helpful. But it was still flipping hard.

I had therapy too. I liked the way Bloorview was set up around the kid and family, not just the kid. They supported my mental health. They checked on me and I sat with counsellors for meetings that were very helpful.

BLOOM: What are common emotions when your child has an acquired disability?

Denise Roussel: The guilt, the grief, the loss and the anger. The sadness. All those, and so many other different emotions. Emotions of feeling calm and happy and feeling really positive seeing your child's progress.

BLOOM: Did anything help you with the challenging emotions?

Denise Roussel: People kept telling me 'This is a marathon, it's not a sprint. You have to pace yourself.'

My dad kept saying 'We're so lucky. Look at the support we have. The best of the best are there to bring you along and to teach you. You become a unit and you get that strength in numbers.' We had the War Amps and SickKids and Bloorview representing Zoe's different needs.

When you're dealing with it, you feel like you're the only one. So meeting other parents helped. I was part of a War Amps group that matches moms up. Just to hear other parents say 'What you're going through is normal. And it does get better.' Because it does. There were glimmers of hope to hang on to. Sometimes I look at Zoe now and I forget, because she does so well.

BLOOM: Did anything help you cope with living in hospital here?

Denise Roussel: I quit my job and slept at the hospital and my mom brought me soup. Zoe wasn't sleeping. She was screaming and crying all night.

There were times when I needed a time-out from the situation.

The few times when a friend picked me up and I went for a walk, or to get dinner. That alone time was so important. You've got to do it. You can't be 'on' all the time. There are times when you have to walk away from it and that's okay. Sometimes you can't push, you need to rest. I felt guilty saying I needed my own time.

BLOOM: How did Zoe initially react to getting her prosthetic leg?

Denise Roussel: She was so adaptable. She was so proud. The first leg she had was a bright pink with a picture of a hamster on it. She booted around the hospital and everyone was amazed.

She did react to people pointing and staring. The War Amps teaches you a lot about handling questions, and how although a few people are rude, usually they're asked out of care and compassion.

BLOOM: Did you find it hard as a parent not to be overprotective?

Denise Roussel: Yes, but I wanted her to learn to handle things on her own. If someone came up and said 'Oh, what happened?' I wouldn't say anything. I'd look at her and say 'Zoe, do you want to answer?' Sometimes she'd go 'No,' and I'd say 'Sorry, she doesn't want to talk about it.' Most times she did, but that was her choice.

BLOOM: Zoe talked about how important horse riding has become to her sense of self. It's funny how we reconnected because Zoe and I were both riding at the same place. I know for me, riding gives me a huge mental boost. When I ride I have to focus so much that I can't think of anything else. So I find it great for mental space and mental health.

Denise Roussel: Zoe feels that too. She feels so free, because she can move so quickly. I'm so glad for her because she loves it so much and it's such a good outlet for her. She has other friends who want to go to parties, and not that parties are bad, but her riding keeps her really grounded. There's a lot of hard work involved, and I'm proud of her. She began when we lived in Alberta and she was about 10 or 11. In the last couple of years she's become competitive.

BLOOM: Do you have other suggestions for parents whose children have acquired a disability through an accident or illness?

Denise Roussel: I think when they're ready, to reach out to all of the resources that are available. Staff at Holland Bloorview can point you in that direction, so you can speak with whatever association offers support for your child. For us it was the War Amps.

You might not think you need that support, but take it. Over time, there are many things that will come up.

BLOOM: How have you changed as a result of this experience?

Denise Roussel: I've always been a social person and a caring person, but now I take more action on things. I've taught my kids that 'saying' and 'doing' are two different things. We do a lot more to help people now, without talking about it, because we had that experience.

The most important thing is our human connection. It could just be having a coffee with someone and listening. It's taught me to take time for people. I've grown and we've grown in so many ways.

I say to Zoe, I don't know if you would have been riding horses if your accident didn't happen. Maybe I would have said it takes too much time, or it's too much money. But now I make the time to do things.

Like this interview? Sign up for our monthly BLOOM e-letter. You'll get family stories and expert advice on raising children with disabilities; interviews with activists, clinicians and researchers; and disability news.