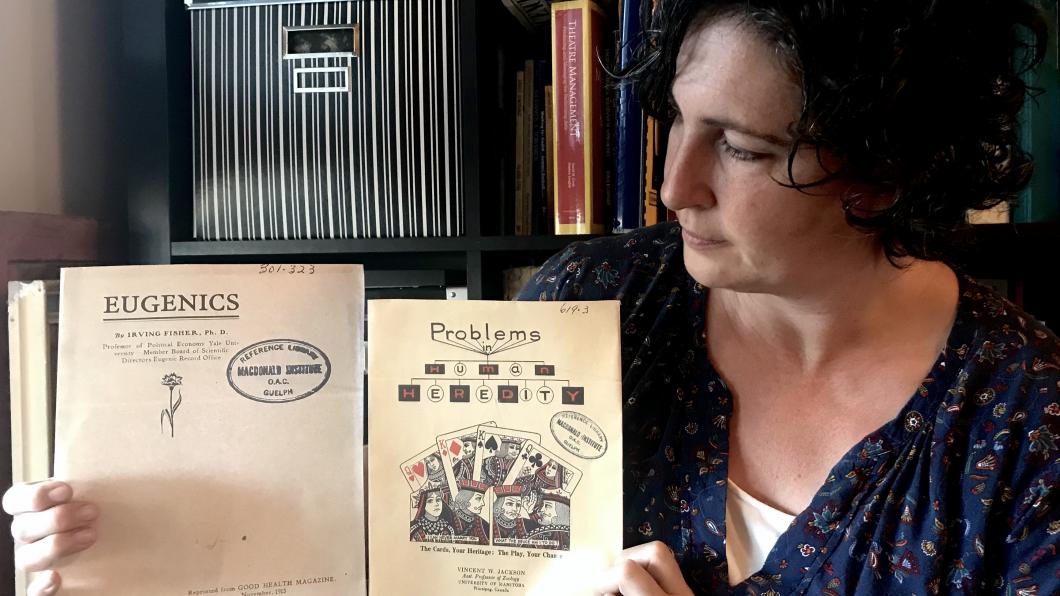 Into the Light is a new exhibit at the Guelph Civic Museum that uncovers the role of local universities in teaching eugenics—the improvement of the human race through selective breeding—in the first half of the 20th century. “Eugenics was about being well born, about improving the race through heredity," says co-curator Evadne Kelly, a post-doctoral fellow at Revision: The Centre for Art and Social Justice at the University of Guelph. “It was about diminishing and eliminating those who did not fit the white, able-bodied, middle-class settler norm—including people of colour, disabled people and the poor.” Kelly had unrestricted access to archives to a eugenics course taught at two of the three founding colleges of Guelph University between 1914 and 1948. BLOOM interviewed Kelly about what she discovered.

BLOOM: Why was there a need for this exhibit?

Evadne Kelly: There are all sorts of value-laden judgments about bodies today. You hear about how people are being treated as if they’re of less value, and it usually comes down to racist or classist or ableist views about their bodies. These ideas are still with us, and why? Maybe some of this history is the reason why.

These ideas that put people into categories of degrees of humanness—with the self-reliant individual being the optimum, and the ‘unfit’ needing to be eradicated—were taught to students studying to be teachers, right here in Guelph, for generations. This was the history of Guelph University, and it was hidden.

BLOOM: What does eugenics mean?

Evadne Kelly: It’s the idea that human society can be improved by applying the science of evolution to human populations. It posits that social problems are caused by the existence of deviant and inferior people, instead of understanding that they're caused by social, political and economic circumstances. Eugenicists believed they could solve social problems, and make the human race better, by preventing certain kinds of people from being born, and allowing some kinds of people to die.

A major error underlying the movement was a seriously flawed notion of heritability. The science itself was wrong.

BLOOM: Can you tell us about the eugenics course you studied?

Evadne Kelly: I had access to the course outlines, lectures and exams for a course that was at one point called Eugenics. Before that, it was called Biology 11. In the course calendar, it was called Genetics 18.

These are some exam questions:

What steps would you take to improve the Canadian race?

State your arguments, for and against, the sterilization of the unfit in Ontario.

The vital statistics of Ontario reveal that the mentally defective population is increasing far faster than is the general population, e.g. in 1871 there were 123 mental defectives per every 100,000 and in 1931, the proportion had reached 400 per 100,000 of the population. Another study shows that the family which sends children to our high schools and universities has on the average 3 children; while the family which sends children to the House for Feeble Minded at Orillia, has on average 9 children. What eugenical principals would you recommend to meet this population problem?

One course book was from a zoologist from the University of Manitoba who had written a teaching manual on eugenics.

In an essay titled Improvement of the Human Race,one student wrote about 'Preventing the Marriage of Morons,' 'Sterilizing the Unfit,' and even setting up a breeding program to create a superior Canadian race.

Course material included newspaper articles and radio addresses featuring a leading eugenicist who was also a guest lecturer. His name was Dr. William Hutton, and he was president of the Eugenics Society of Canada.

BLOOM: What kind of students learned this material?

Evadne Kelly: They were studying to be teachers. Some were going on to become nurses, dietitians, physiotherapists and psychologists. Part of their training was to go to places like the School for the Deaf in Milton, orphanages, and the Mohawk Institute Residential School, which was an Indian residential school in Brantford. They also went to what was a hospital in Orillia.

BLOOM: It was once called the Orillia Asylum for Idiots, and later renamed Huronia Regional Centre. Were these children introduced to them as being inferior?

Evadne Kelly: There is no way to confirm that from the archive. However, eugenicists believed they could fix and improve some people.

We do know from some of the correspondence in the archives, that students in the Eugenics course went on to work at some of these places when they graduated.

There wasn’t a lot of critical thinking in the course. It was rote learning, where students had to memorize and regurgitate the information. It didn’t teach people to think.

BLOOM: Can you describe the exhibit?

Evadne Kelly: It’s a multi-media, multi-sensory exhibit. When you first arrive, you will hear the voice of co-curator Mona Stonefish, an elder speaking in Anishinaabemowin, with video of an American Sign Language interpretation and co-curator Sky Stonefish dancing.

You will see a large image called 'Steps in Mental Development: Where They Stumble—the Limit of Development of Each Type." It was published in Dr. Helen MacMurchy's Eighth Report to the Ontario Legislature on "The Feeble-Minded in Ontario" in 1913. Dr. MacMurchy was a eugenicist who guest lectured a number of times in the Eugenics course.

She was  also an inspector for the feeble-minded in Ontario. She was a eugenicist who believed people with intellectual disabilities were born with a certain mental age and stayed at that age. She was a harsh proponent of institutionalization and educational segregation.

As you go inside you will see representations of memories of people who survived eugenics. When they were institutionalized, these people were made to do a lot of physical labour, such as hauling heavy sacks of potatoes and flour. So we have these large sacks, which are symbolic of the ways in which institutions tried to dehumanize them.

We will be projecting slides used in the Eugenics course. One is about classification of human stock, and another is about race assimilation. You can listen to radio addresses that were sponsored by the Eugenics Society of Canada and meant to educate people about eugenics in their homes.

Some parts of the exhibit are types of activism by the co-curators. For example, Peter Park, who is a founding member of People First of Ontario and Respecting Rights, contributed videos on how to respect the rights of people with intellectual disabilities in health encounters. So there are examples of what a good, and a bad, health encounter would look like.

BLOOM: What do you hope people take away from the exhibit?

Evadne Kelly: I think it’s important for people to know that this happened, because it's completely hidden. People tend to think it happened far away, at a particular time and place, and it’s not here, and not now. People need to start seeing that these things are still with us.

The materials are accessible in multiple formats, so I’m hoping it will mobilize people who were marginalized, and invite conversation and relationships with them that can continue into the future.

I want to transfer knowledge differently from how it’s been translated in the past—from experts telling everyone else what they should know. There will be opportunities for people to respond to the exhibit, and be a part of the conversation, while they’re there. We will also be holding a conversation with the co-curators in October.

BLOOM: Don’t you think universities continue to foster the idea that there is only one kind of intelligence, and that people with that knowledge are morally superior?

Evadne Kelly: I think there are places that are still like that. But I don’t think it’s across disciplines. I have a PhD in dance studies. That’s one place where physical intelligence is valued really highly. But one of my reasons for doing this is that dance continues to be a really ableist space.

BLOOM: I guess I’m thinking about how people with intellectual disabilities are not seen to have knowledge that is valuable.

Evadne Kelly: Yes. There are other ways of knowing and being in the world that are valuable. Hierarchies of intelligence are problematic. How do you decide what intelligence is? There’s so much value-laden judgment in that. And who contains that knowledge is exclusionary.

It’s interesting, because I have a University of Guelph business card. It’s red, which is the university colour, and in the bottom right it says ‘Improve Life.’ What does that mean, to improve life? Who are we improving? Are we suggesting that some people have more right to exist as human beings than others?

BLOOM: Wow. So that’s the university’s tagline. Because of course, people who are marginalized—by race, poverty or disability—are still underrepresented in certain university populations. I noticed that the phrase "Choose your life" is also on the university's website. But we know people who live on the margins don't have the same choices as those who are privileged. It's interesting that some of this language seems to hearken back to the ideas taught in the course you studied.

Into the Light: Eugenics and Education in Southern Ontario runs from September 14, 2019 to March 1, 2020, at the Guelph Civic Museum. Hours are Tuesday to Sunday, 10 a.m. to 5 p.m., and the fourth Friday of every month from 5 to 9 p.m. Admission is $6 per person. Into the Light is co-curated by Mona Stonefish, Peter Park, Dolleen Tisawii’ashi Manning, Evadne Kelly, Seika Boye and Sky Stonefish. It is funded by the Guelph Civic Museum and Bodies in Translation: Activist Art, Technology, and Access to Life at the University of Guelph. Bodies in Translation is funded by the Social Sciences and Humanities Research Council of Canada.