On-site accreditation survey highlights safe, high-quality care. Surveyors from Accreditation Canada are at Holland Bloorview. Find out what this means for families. 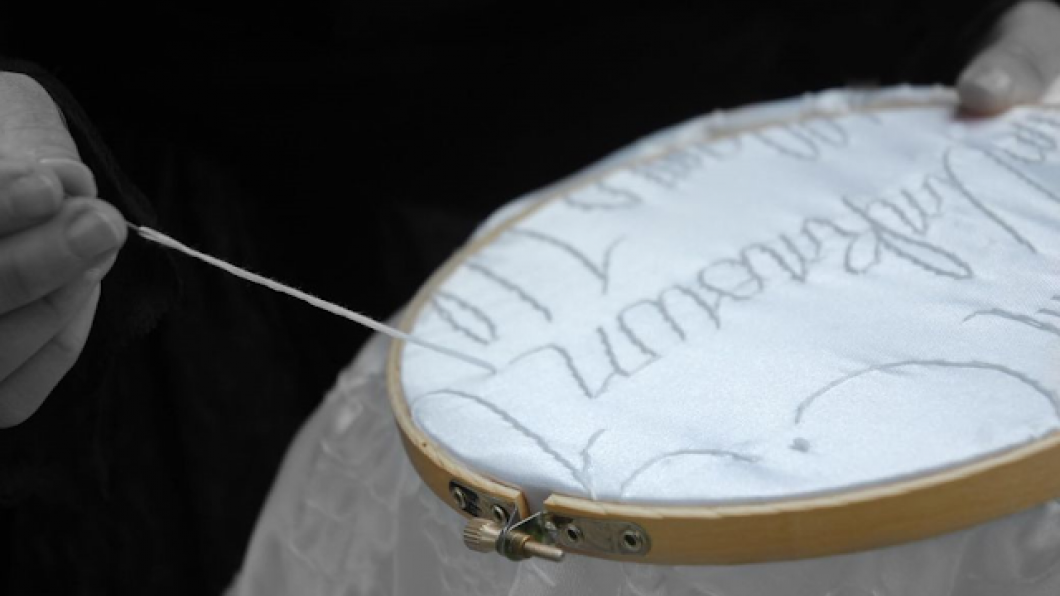 A Stitch in Time: Mourning the Unnamed is a research and art project that honours the children and adults who lived and died in the Orillia Asylum for Idiots—which was renamed Huronia Regional Centre when it closed in 2009. Kim Collins just defended the project, which was her master’s thesis, at York University.

BLOOM: You mentioned that you worked with people with intellectual disabilities before this project. How did you get into that field?

Kim Collins: I worked in a variety of positions at day programs and also for people privately. One of the things about disability is that we assume disability is separate from ourselves. But when we look at our history, we see disability is everywhere and it intersects in all areas of our lives. Five years ago I would have said that I fell into care work, without recognizing that disability had already been in my life. I spent my formative years around a number of disabled people and I hadn’t really considered that before.

BLOOM: What is A Stitch in Time: Mourning the Unnamed?

Kim Collins: It’s a project that uses archival material and art to think through the institutionalization of people labeled with intellectual disabilities. It looks at how they were forced into unpaid labour and how they remain unnamed in both records and in death.

BLOOM: You studied what happened at an institution in Orillia.

Kim Collins: Yes. It changed its name three times. It was the Orillia Asylum for Idiots when it opened in 1876, then became the Ontario Hospital School Orillia and finally was called Huronia Regional Centre.

When I began my master’s at York I came across two records that formed the basis for this project: one an annual report of the Orillia Asylum for Idiots, written in 1887, the other a 1928 industrial training document for the Ontario Hospital School Orillia.

BLOOM: Can you speak a bit more about that?

Kim Collins: Patients were forced to work and weren’t paid or compensated. They were forced to make coffin liners and anything that could be used within the institution: staff uniforms, ties, clothing and bedding. They also had a working farm and a place to do leather work. I’ve seen a few documents that list industrial-related revenue from the institution, but it didn’t itemize what was sold.

BLOOM: So you’re saying that some of the products were probably sold outside the institution, as well as being used inside?

Kim Collins: Yes. Shortly after the institution opened they had knitting and sewing programs. The people deemed the most capable were most profitable for the institution. But those who weren’t deemed capable still had to work. They did labour—caring for other patients on the wards. At one point, the institution had the lowest cost per patient in the Western world, in part because of the way that people were exploited.

BLOOM: How old were the residents?

Kim Collins: When it opened it was primarily for adults. Then they started taking children. At first there were no children below the age of six. Then it became toddlers and infants. There are even stories of some women giving birth in the institution. The Orillia Asylum for Idiots had a connection to child welfare, so that when a children’s residence became full, the kids could be shipped to Orillia.

The building was built as a hotel, and then operated as a lunatic asylum, but it closed. The town was quite upset because it had been profitable. So there was a huge push from the mayor and other people to get the new institution functioning.

BLOOM: What types of disabilities did the people there have?

Kim Collins: They were assumed to be socially and economically marginalized and therefore labeled as ‘feebleminded.’ At that time, feebleminded was a catch-all term. It included intellectual disability, but also anyone considered ‘abnormal.’

BLOOM: How did you first learn about the institution?

Kim Collins: In 2014, I met Pat Seth and Marie Slark. They’re survivors of the institution who brought the class action lawsuit against the government of Ontario because of the abuse and neglect they suffered. During a talk, they asked listeners to be their union and to take up their story. Since then I have been working with survivors on a variety of projects to help share their stories.

BLOOM: What did you learn about how they were treated?

Kim Collins: They lived in horrid conditions. Abuse and neglect were commonplace. Over a number of decades medical inspectors noted the filthy and overcrowded conditions. Several reports mention blood and pus on bedding, dried fecal matter, patients bathing in toilets, patients sleeping two to a bed, and the constant and overpowering smell of urine and feces.

Toronto Star columnist Pierre Berton wrote this about the Huronia Regional Centre in the 1960s: “...After Hitler fell, and the horrors of the slave camps were exposed, many Germans excused themselves because they said they did not know what went on behind those walls; no one had told them. Well, you have been told about Orillia.”

BLOOM: How do you honour the memories of these children and adults through art?

Kim Collins: I used writing, textile, photography, paper art, and music, to present the research in an accessible way.

As a way of marking and mourning patient 357, the nine-year-old boy who died, I highlighted the unknown names of patients who died in the institution by embroidering the word ‘unknown’ for every third, fifth and seventh name listed.

I realized early on in the project that photography would be an important addition. Photography was invented during the late 1800s and featured prominently in a number of mourning rituals. Local photographer Anne Zbitnew took a series of photographs of me embroidering the casket liner, in Victorian mourning garb.

While working on this project by the banks of the Humber River, I recognized the importance of sound: the sound of needle through fabric; the sound of water rushing over rocks; the sound of music as it embodies experiences. I worked with Toronto musician Jeff Scarrott, who composed an original piece of music in response to reading archival material and watching me sew the casket liner.

While reading medical inspection records, I noted that two reports outline the deplorable conditions and argue that cut flowers would make the situation better. So I took the death records from 1887 and made 15 paper roses—the sum of three plus five plus seven, again, in recognition of child patient 357. Crimson roses were used to symbolize mourning in the Victorian period.

BLOOM: How many people were buried there?

Kim Collins: There are 571 marked graves and numerous unmarked graves. Before the 1960s, people weren’t buried with names, only numbers. The graves marked with patient numbers have long rectangular stones. Grave markers have been moved and disturbed—both by people stealing them, and at one point the cemetery itself was dug up for the installation of a sewage pipe.

There’s a story that the local priest was in someone’s backyard and tripped over a paving stone. The stone flipped over and the priest saw the number and realized it was a grave marker.

The cemetery is exceptionally small. The number of people who would have been buried on that land over the 95 years the cemetery was used is likely much higher than the marked graves.

Survivors and allies are working together to ensure that those who are buried there are respected. They’re working to complete a registry of who was there.

BLOOM: What was the greatest challenge of this project?

Kim Collins: The process of bearing witness. My intention has been to feel through this research, not just think it. The process has been an emotional one. My stance is not that of the victim or survivor, but of the witnessing listener and empathic bystander. This has been a difficult position and process.

BLOOM: How did you cope with everything you were learning?

BLOOM: How did the children and adults die there?

Kim Collins: The archival records state the proximate cause of death but that reveals very little about how the people actually died. In the death records from 1887, for example, it states that some patients died from general debility. General debility can be caused by variety of illness and factors, including extreme stress, lack of sleep and inadequate nourishment.

BLOOM: How was their burial different from traditions of the time?

Historian Julie-Marie Strange, in writing about pauper burials in England during the Victorian period, says that these burials highlighted the shame of poverty and resulted in the denial of mourning rituals and customs. Strange shares a newspaper article in 1892 in which the need for graves had outpaced the space available. Employees dug up the graves and smashed coffins in order to deposit the bones into a basket and then into a rubbish heap. This example, while from England, can offer some insight into how the small space of the Huronia Regional Centre Cemetery could potentially hold such a large number of bodies.

The archival records of Orillia do mention the lack of culturally sensitive burial rituals for Jewish patients.

For those outside of the institution, the Victorian period had strict mourning rituals. After the death of Prince Albert, the mourning practices of Queen Victoria became widely followed by all classes. Relatives of the deceased were to wear black clothing for up to three years as a public display of respectable grief.

BLOOM: Would the people in the Orillia institution have worn black clothing?

Kim Collins: Absolutely not. In the institution you wore what they gave you to wear. There was no personalized clothing.

BLOOM: Were you already an artist—or did you teach yourself how to embroider for the project?

Kim Collins: I grew up with an artistic and ‘crafty’ mother who taught me how to sew, but I hadn’t mastered the detail-oriented craft of embroidery. Despite having sewn for years, I felt it was important to follow the steps set out in the 1928 document. I attended sewing and embroidery classes with the intent of embodying each step in the industrial training document.

While the classes were useful, I would say that I learned embroidery by doing. I spent over 300 hours embroidering names, numbers and ‘unknown’ on the casket liner.

BLOOM: Will your project travel?

Kim Collins: My plan is to exhibit the project. This will require the construction of a casket for the liner and I am currently researching how to construct a Victorian era style casket.

BLOOM: What did you learn?

Kim Collins: I learned that mourning leaves with us remnants of those we have tried to mourn. The dead now live within us, our bodies their crypts, and so through mourning we are forever changed.

BLOOM: What message do you hope people take away?

Kim Collins: I hope it engages people to think not only about the history of institutionalization and our complicity in that history, but also about the ways in which history repeats itself.

I’d like people who know nothing about the institution to see the project.

Did you value this story? Click here to get our monthly BLOOM e-letter in your mailbox. 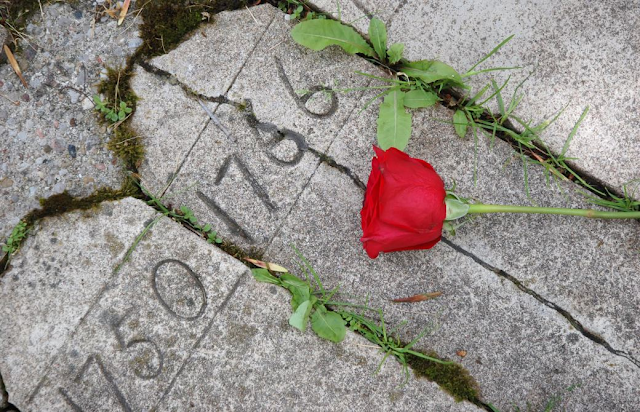