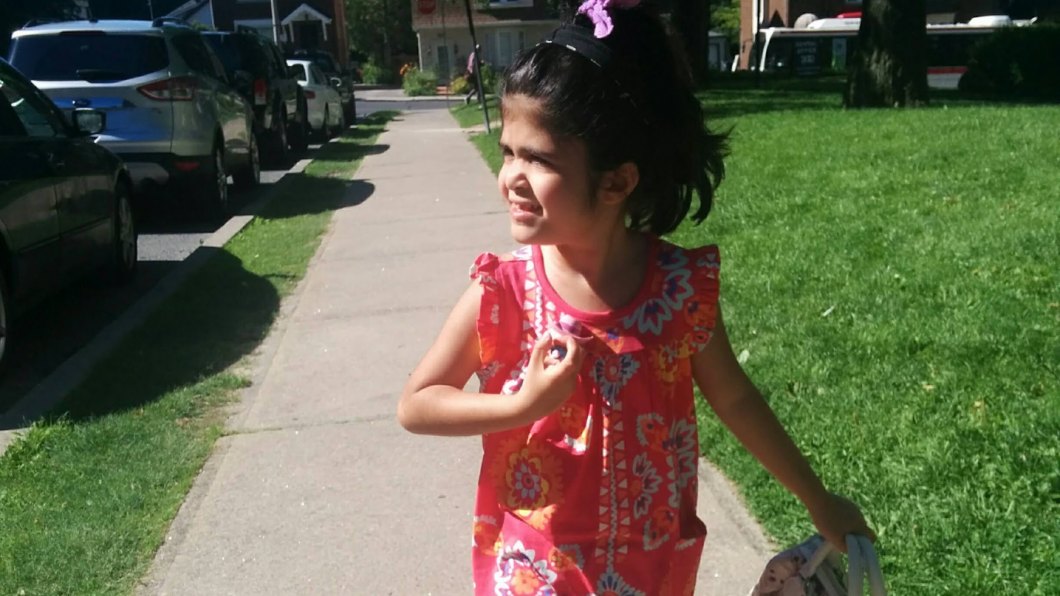 It was baby steps for both Lilly and mom

For 6-year-old Lilly, the past summer was nothing short of memorable. The warm weather brought with it afternoons of chocolate ice cream, mornings pedaling on her bike, pink helmet and all, and cool, lazy days floating in the pool.

Summer also brought fun and relaxing days at the Spiral Garden—Holland Bloorview’s outdoor art and music camp—where Lilly, after a day spent expanding her imagination, would return home with a beaming smile and a stray twig or leaf in her hair.

And while most mothers may feel exasperated from doing extra laundry for Lilly’s mother, Narges, the sight of her daughter, dirt stains and all, was a very welcome sight.

“I loved it, because it meant she was connecting with nature and having fun, just like every kid should in the summertime,” says Narges.

It’s also a positive sign of the long way Lilly and her family have come from her birth until now.

When the fog set in

When Lilly was first born, Narges and her husband Farhad were excited to add to their growing family. From the moment they held her in their arms, they fell utterly in love. Their family of three had turned into four and now they felt complete.

But soon after Lilly’s birth, Narges started to realize, unlike their son Dylan, Lilly didn’t squirm and wriggle around. She didn’t wave her hands in the air or try to grab her little toes. In fact she rarely moved at all.

“It’s hard to describe how I felt in those early weeks and months. I remember standing over her crib in the middle of the night, shifting her position so she wouldn’t get sore from lying in one place,” Narges says.

“My heart ached for my little girl. I felt afraid, confused, and helpless.”

Just after her first birthday, Lilly was diagnosed with 1p36 deletion syndrome. It’s similar in some ways to Down’s syndrome, and the condition can be mild or severe. Narges and her husband, Farhad, felt like they were falling, trying to understand where Lilly was on the spectrum. So, the family turned to Holland Bloorview for help.

“At first, everything the doctors and therapists said sounded like gibberish. I couldn’t understand the medical terminology, and it didn’t help that I felt like I was walking through a fog,” says Narges.

“Sometimes, I’d just start crying out of the blue. And they’d stop everything and just be there for me, comforting and supporting me until I was ready to take the next step forward.”

From then ‘til now

For the past few years, Lilly attended Bloorview School, spending her Grade 1 year easily alternating between both her classes and therapy sessions at the hospital.

“When we first brought Lilly to Holland Bloorview, she couldn’t even move her head,” says Narges.

The latter she enjoys doing through Holland Bloorview’s music therapy program—one she took to quite easily and enthusiastically.

“Lilly really took these lessons to heart! Now, when I say something to her like, “Lilly, time to stand up,” she can listen, understand, and then do it—all because of what she’s learned through music therapy,” says Narges. It puts a huge smile on Narges’ face.

And while this year Lilly will be saying goodbye to Bloorview School and going into Grade 2 at her community school, Narges is excited for what’s to come.

“To be honest, I’m a little nervous,” she says.

“But then I look back at how far she’s come—from not being able to move her head to playing outside at summer camp. Holland Bloorview has brought us this far, and I know we can count on them for the times ahead.”