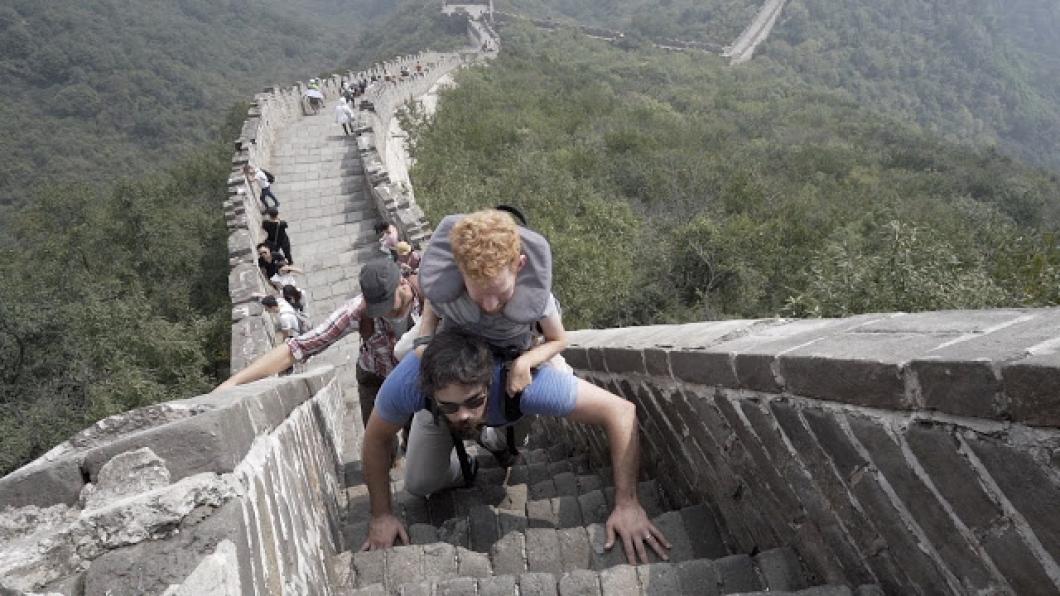 We’ve interviewed Kevan twice. Once about his 2016 trip to Europe with friends who carried him in a modified backpack, and once as he planned a similar trip last year to China, where he visited care centres that support orphans with disabilities. Kevan lives in Fort Wayne, Indiana, has spinal muscular atrophy, and weighs about 65 lbs. It was awesome to meet Kevan in person.

BLOOM: What is the purpose of your new book?

Kevan Chandler: The new book chronicles our adventures in Europe and then China, and everything building up to that, with a little bit of autobiographical information about my childhood. It’s a travel memoir of our journey so far, and within that it gives a lot of insights on my perspective about disability and our friendships and how that all ties together.

BLOOM: What message do you hope readers take away?

Kevan Chandler: I think for folks with disabilities, it’s an encouragement to see someone with a disability living a full life, and in such a way that people can read it and say ‘Oh, yea it is possible. I can do that, too, in my own way. Our story is about how we figured out how to do things. We’re not telling people how, but saying you can figure it out with the people around you.

For the able-bodied community, the book is an insight into a world they may not be familiar with, and an encouragement to plug into that world. It’s an ice-breaker.

BLOOM: We spoke with you before you went to China. Now that you’ve actually been there, what was the greatest challenge?

Kevan Chandler: There were a lot of challenges. We went to three cities and we had three very dynamically different experiences. Going into each city, we’d get settled, fall in love with the place and have to leave. We spent most of our time in care centres for orphans with disabilities—really getting to know the children and staff and very quickly building some life-long relationships. It was surprising how you can be somewhere for only four to five days and feel homesick for that when you leave.

BLOOM: I guess you were immersed in the children’s lives.

Kevan Chandler: To see that 24-7 life of caring and loving for these kids, and being in that community, yes, we were immersed. And there was a physical toll as well. The first city we were in was a village in the middle of nowhere. The conditions were more difficult there. The other care centres were a bit more Western—spectacular, clean and well-equipped.

BLOOM: What did you do there?

Kevan Chandler: We rolled around on the floor and played with them and held them and cuddled them and talked with them. They loved having us there. Most of the nannies and caregivers are women, so it took a little time for them to get used to a group of guys.

There was a language barrier and a lot of the children were non-verbal, so there wasn’t a lot of communicating with words. At first the guys brought me in and set me in my backpack with the kids, but the kids didn’t know what to think of the backpack. I decided it was better to lay me on the floor with them: ‘I’m here, I look like you.’ We talked with them and made noises and rolled around.

BLOOM: Did you take any of your backpacks with you?

Kevan Chandler: We took two to donate. The staff would bring a child into the room to meet me, and one of the guys would get me set up in my backpack while the child watched. If the child responded well, we’d pull out the extra backpack. We’ve been working with Deuter to develop an adapted design. When we get the first order in this summer we’re sending 10 to the care centres, with a plan to send more.

BLOOM: What was the greatest joy of the trip?

Kevan Chandler: Being with the kids was the greatest joy, and getting to experience it with my friends. You can imagine the heart of these guys to care for me like they do, so I can travel with them. We saw everything from the care centres to the Great Wall (see photo above) and the Shaolin temple.

BLOOM: Isn’t there a lot of stigma towards disability in China?

Something I was surprised by was that when we would walk through the market or the city, people—especially of the older generation—would stop and give us the thumbs up and shake the hand of whoever was carrying me. They seemed to have a lot of respect and appreciation for what the guys were doing.

We knew there would be a language and some cultural barriers. But we hoped that the spectacle of one guy carrying around another guy would be a visual that would inspire and encourage people.

BLOOM: How often do your friends switch off with carrying you?

Kevan Chandkler: We try to do a 45-minute switch, that way no one gets completely worn out. Something really neat was that we had other people, outside of our team, carry me as well. At the care centres, a couple of the workers were big guys who said they’d like to help out, so they took turns when we were in the market. Our translator, who didn’t come to carry, also carried me as well. We had only brought three carriers, so it was cool to incorporate more people.

BLOOM: You have a non-profit called We Carry Kevan. What is the mission?

Kevan Chandler: Our mission is to redefine accessibility as a cooperative effort—people helping people, and getting involved with each other’s lives. Right now our main focus is implementing the backpack, and encouraging people who can, to use it. It will be available this summer and is a one-size that fits up to 70 lbs.

BLOOM: What does it cost?

Kevan Chandler: It’s US$375. It’s completely adjustable and versatile for different sizes and needs. For the past two years we’ve been developing it with Deuter. We‘ll work with a family to customize it to each individual. Managing that, and with my book coming out, has been a full-time job.

BLOOM: What makes your travel unique is the participation of really close friends. How can that work for kids who don’t have friends?

Kevan Chandler: I talked to my mom about it recently, and she said when I was diagnosed she and my dad decided they would raise us as normal as possible (my sister also has spinal muscular atrophy). They knew that would take a lot more work, but they wanted us to be involved in the able-bodied community.

What they ended up doing was that we were out in the world, and we also invited the world in. That introduced that idea of community. It normalized for our community the idea that my sister and I, we had needs, and people could help out. It taught us not just to ask, but to invite people into that. It also taught our immediate community how to respond. As I got older, it became more my responsibility. It’s going to be uncomfortable, but you have to put yourself out there. It’s worth a try. Everyone may not get it. But the people who do get it are going to be awesome.

You can follow Kevan at We Carry Kevan. The group is working on organizing international shipping for its adapted backpacks. If you have any questions, please e-mail at wecarrykevan@gmail.com. The photo below was taken at one of the care centres in China where kids got to try out the adapted backpack. Check out Kevan's Ted Talk. 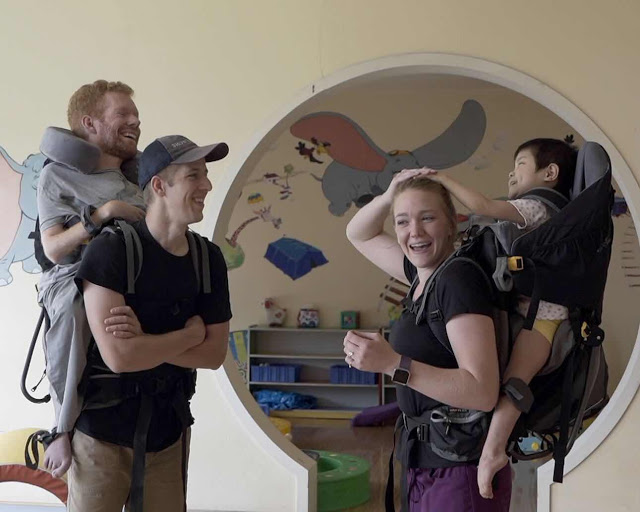