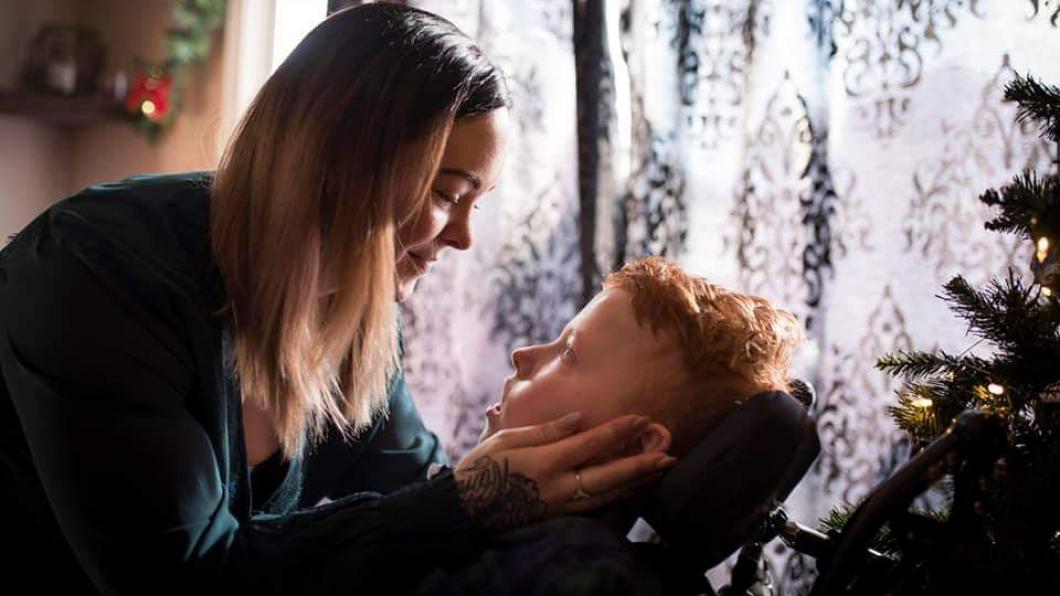 Sawyer can't get a nurse, so he can't go to school

Sawyer Schultz is a 12-year-old boy with complex medical needs who relies on a surgical opening in his neck and a tube in his trachea to breathe. Prior to the pandemic, he went to school in Bowmanville with a nurse five days a week. He loves art, music and science, but hates math!

Over the last year, Sawyer's daily nursing hours plummeted—first to two days a week, and then to three days a month. In August, Sawyer's mom Kayla was told that although her son is funded for 19 hours of care a day, there was no nurse to fill the day shift, and that meant no school for Sawyer in the fall.

The COVID-19 nursing shortage hitting hospitals across the country has driven community nursing, already thin on resources, into crisis.

The Schultzes are one of dozens of Ontario families whose medically fragile kids are being denied an education. And when medical care during the school day falls entirely on parents, everyone suffers.

Kayla had hoped to graduate from her Health Promotions program at Seneca this year. "Last year I had to drop out of college and am forced to live off Ontario Works while providing ICU-level care at home," Kayla says. "While these funds sit untouched and unused, I struggle with poverty, unable to gain employment or continue my college education. Social assistance doesn't pay enough to cover our rent, let alone the financial responsibilities of running a medically fragile household."

Last Wednesday the Ontario Disability Coalition (ODC) sent a letter to Health Minister Christine Elliott requesting an urgent meeting on behalf of families in similar situations. Their children "tend to require 24/7 care and are literally exhausted as many are covering unfilled day and night shifts as well," wrote Sherry Caldwell, who heads the group. "This is also a safety issue as parents are burning out."

Marcy White is a Toronto parent who has advocated for more than a decade for better home-care nursing. "Blaming these issues on Covid is a cop-out," she says, "because many of the problems existed long before Covid. Families with complex kids face nursing struggles on an almost daily basis, and it's not limited to school."

Back in March 2016, Marcy spoke to BLOOM about how her son Jacob was funded for 24-hour nursing care, but about 40 per cent of shifts that month went unfilled. “However, the bigger issue we have is that if I have a nurse here who is incompetent, or doesn’t have the skills, I’m still on—I can’t leave the house, I have to be in the room to watch," she said at the time.

Marcy says children like her son are too complex for community nurses who lack specialized skills and hands-on experience. “With medical advances, the needs of this population have changed, but the qualifications and experience of nurses haven’t caught up.” Meanwhile, home nurses are paid much less than hospital nurses, making it hard to retain them.

In an earlier BLOOM piece, Marcy recounted numerous near-misses with nurses who didn’t know how to do a procedure, almost made a medication error, fed Jacob—who doesn’t eat orally because he chokes—or fell asleep.

In 2019, Marcy proposed a new model of home care in this guest blog for CMAJ Blogs. “We need skilled nurses, hired by hospitals, who will do a certain percentage of their shifts in the community,” she said at the time. “This would create more well-rounded nurses and continuous care, and you wouldn’t have nurses in the community worrying about losing their income when a child goes into the hospital."

Marcy notes that while she speaks publicly on the "faulty home-nursing system," many families are afraid to do so. “They live in fear of an agency cutting back their hours, and I’m proof that it happens.”

After Marcy participated in a series of Global News stories in 2016 about home nursing problems, one agency—the largest provider in Toronto—refused to work with her son, giving the family two weeks’ notice.

Kayla says her son Sawyer has funding to cover 19 hours of nursing a day through the Ministry of Children, Community and Social Services and the local Home and Community Care Support Services network (previously the Local Health Integration Network). But "since May 2020, I have been providing 90 to 100 hours per week of unpaid caregiving for my son, while all of his ministry funding sits untouched. When I ask if I can be financially compensated for the workload I've picked up with their non-staffing, I'm met with silence."

Kayla was supposed to have major surgery this year, but delayed it because she can't rely on nursing coverage for her son while she recovers. And it's not just the day shift she has to worry about.

"Our agency frequently cancels night shifts with little to no notice," she says. "When this happens, I'm responsible for 40 consecutive hours of awake caregiving. There are so many safety concerns with this, as Sawyer requires an awake, alert caregiver at all times. In the month of August, I had 3 cancelled night shifts in a span of 10 days. The agency doesn't offer any solutions, nor do they replace any lost hours from cancelled shifts. This has been extremely detrimental to my own health. The gaps in care are getting larger and larger and we are drowning in them."

Sherry notes that the province doesn't track unfilled nursing hours for families with medically fragile children and report them publicly. "We think there are more than 100 families affected, but it could be much higher, because many struggling families don't connect with our group, or others, on Facebook. They're just operating in survival mode."