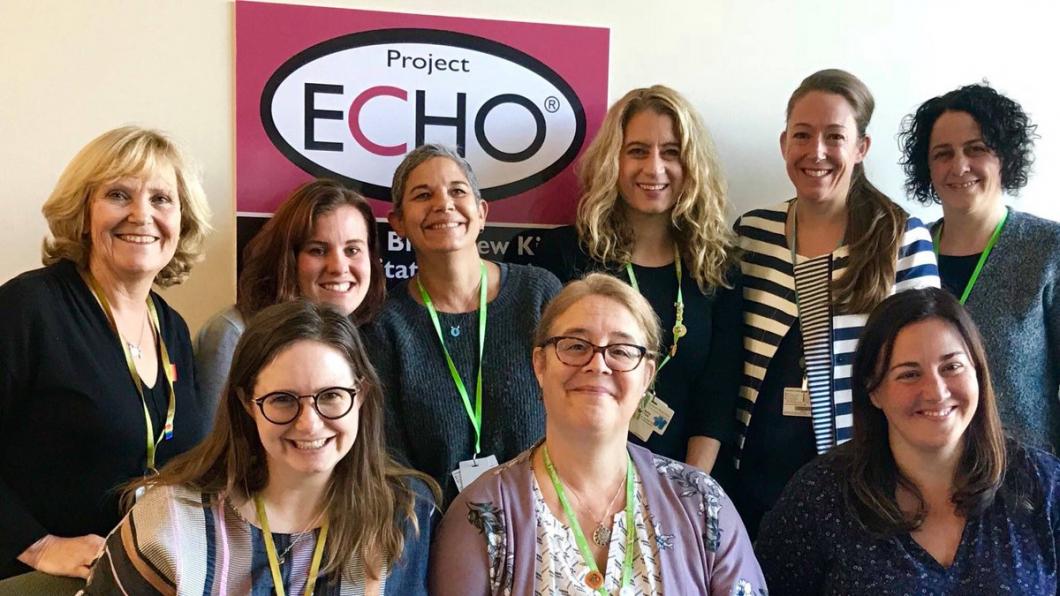 Salina Eldon is the project manager of ECHO Ontario Autism—a virtual Holland Bloorview program to teach Ontario doctors and nurse practitioners to diagnose and manage autism, so children can receive care close to home. Prior to that Salina spend 18 years at MukiBaum—now called Aptus—a school for children and teens with an intellectual disability who also, often, have a mental health disorder. She began doing assessments and intake there, and ended up managing the program. We spoke about her move from clinical into research and administrative work.

Salina Eldon: My interest in disability started when I was very young. I grew up in the Bahamas, and one of my earliest memories is going to church every Sunday and seeing a young boy there who used a walker. I believe he had cerebral palsy. He didn’t speak, and I was always intrigued by him, and thought ‘I’m sure he has a lot to say.’ I was very drawn to him. Over the years, I often wondered how he was.

A few years ago, things came full circle when a friend of mine, who is a filmmaker, made a movie about this boy called I Am Not a Dummy. I discovered that thankfully, somewhere in his teens, his teacher brought him a typewriter to see if she could teach him to communicate. It worked. And the first thing he typed was ‘I am not a dummy.’

When I was a teen, I worked in the physiotherapy department of a hospital in the summers. I thought about studying to become a physiotherapist, but then I switched to psychology. I did my undergrad in early childhood education and psychology at Western, in London, Ont. Many students from the Caribbean attended Western because they had a preliminary year option that was like a Grade 13.  After graduating, I taught preschool for three years in the Bahamas. Then I did a Masters equivalent in assessment and counselling at the University of Toronto’s Institute of Child Studies.

BLOOM: What was it about assessing kids that you enjoyed?

Salina Eldon: What interested me was trying to find the best way to teach a child. If you do an IQ test, the focus isn’t just the big number. It’s looking at the various areas of skill underneath—such as comprehension, verbal memory and processing speed—to see where the child needs support, and how you can use their strengths to support those challenges. I wanted to know how to teach kids effectively—and that means not teaching all kids in the same way.

BLOOM: What did you do when you first came here?

Salina Eldon: I worked in research with the Autism Treatment Network. We created a research registry, and conducted multi-site studies, to improve medical care for children with autism in areas such as sleep and anxiety. We followed children to look at what treatments had helped, or not helped, over time.

BLOOM: What is the purpose of the ECHO project you now manage?

Salina Eldon: ECHO stands for Extension of Community Healthcare Outcomes. It’s a model developed in New Mexico, by a doctor who specialized in treating Hepatitis C. He realized that even though they’d found a cure for Hepatitis C, the death rates were not declining. He lived in Albuquerque, and it’s so spread out that people who got the diagnosis couldn’t get to the specialty centres to get treatment.

No one local knew how to do the new treatment. So he started a video conference format for training primary care doctors to give them specialty care knowledge, so they could treat people in their own community. Then the death rate declined.

BLOOM: How did you apply this model to autism?

Salina Eldon: We meet bi-weekly for two hours, using videoconference, to educate Ontario physicians and nurse practitioners in how to diagnose autism and manage its symptoms. We began in 2018 and have run one cycle, with 16 sessions. We have between 30 and 35 professionals who join online. Our hub team here, doing the teaching, includes a neurologist, developmental pediatrician, behaviour therapist, occupational therapist, nurse, psychologist and two parents. There’s a small teaching component each session, and then we discuss cases. We also did a two-day boot camp on diagnosis last year. The program is funded by the Ontario Ministry of Health and Long-Term Care.

Salina Eldon: To reduce the wait list at Holland Bloorview, so we see only the complex cases, and families can get the care they need in their own communities.

BLOOM: How do the parents contribute to the teaching?

Salina Eldon: The parents are the bomb. They’re on the ground, and they often know things we don’t know. They know more about wait times, and about other available services. Sometimes we’ll suggest a service, and one of the parents will say it doesn’t exist anymore, but try this one. They can also give practical advice on things like going to a school meeting. During our boot camp, the parents gave feedback on how participants provided an autism diagnosis in a simulation.

BLOOM: What does a typical day for you look like?

Salina Eldon: It’s different every day. There’s a lot of organizing, a lot of follow up after every session. We look up resources and send them to participants, depending on the cases we discuss. We have rolling registration, so there are always new people joining. I work with a research coordinator who is doing the research study that’s part of the project.

BLOOM: What are the greatest challenges?

Salina Eldon: Initially it was technical—with videoconferencing. Everyone else would be on the call, and we would drop off. Now we have our own line and it’s fixed. It can be challenging to stay on top of the doctors and what they need to do, because they’re so busy. Getting cases from the doctors we're going to discuss organized—and reviewing them to take out any identifying information—takes time.

BLOOM: What are the greatest joys?

Salina Eldon: One of the greatest joys for me is I’m learning all the time. And I get to feel like I’m making a difference. As this gets bigger, and we bring more physicians in from remote areas, I think we can do a lot of good work. It means families won’t have to travel from Timmins, which they currently do for example, to come here to see someone in our psychopharmacology clinic. They’ll be able to get the help they need in their own community, where they’re comfortable.

Salina Eldon: I love the people I work with, and I love where I work. Also, because I work in the Autism Research Centre, I get to see kids that I haven’t seen since I worked with them on past studies when they were much younger. You get to see their development.

BLOOM: What emotions come with the job?

Salina Eldon: My job now is more administrative, so I don’t consider it stressful, which is great. My work before, when I was working at MukiBaum, was stressful. I would take it home with me and fret about it, and worry about the kids.

BLOOM: Is this admin role better?

BLOOM: How do you manage stress?

Salina Eldon: I do a lot of walking outdoors. My first love was singing. I also helped develop and run a music program funded by the three arts councils in Ontario. It was called Keys to the Studio. It was for adults with any kind of disability. We had community musicians work with them at a community centre. They had one-to-one sessions, band sessions, and they even put on shows. That was joy. The program stopped because the funding stopped, but the group is still connected on Facebook. The musicians I worked with would invite the guys to their own home parties.

When a parent asks for a social skills group, my first question is ‘What does your child love to do?’ Whatever it is they love to do, get them involved in that. It doesn’t have to be with other kids with special needs. If you put your child with other kids or adults with the same passion, they’ll have something to talk about. That's my best advice to parents.

I know community schools, and others, are often trying to shut down things they consider a child’s obsessions, because 'it’s time to do math.' Why don’t we do math with what they love to play with? If the child likes Lego, teach everything using Lego. What they love is the key.

BLOOM: If you could change one thing about children’s rehab, what would it be?

Salina Eldon: I adore the people I work with who have autism. I find them so interesting, and I wish everyone would. They’re people. They have personalities. I just wish everyone could see who they are, and see the joy, without making judgments. It’s about acceptance and inclusion. We’re getting there slowly.