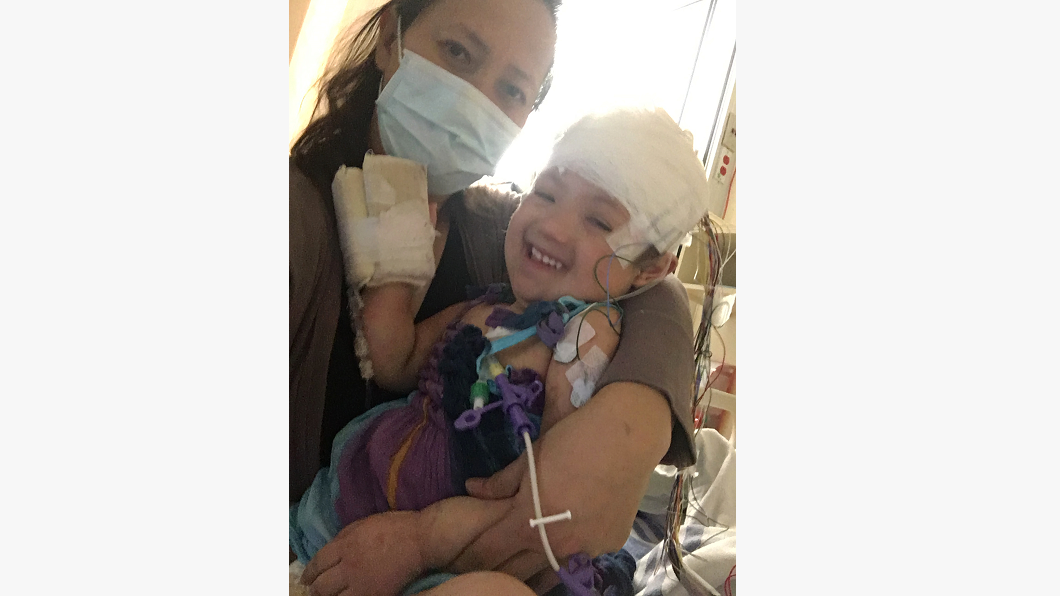 Good Morning Mister Rooster is Adrianna Canete-Costache’s favourite song. When she wakes, she insists that her parents greet her with a rendition. “Every single day that’s what we play, and it brightens her up anytime,” says her mother Catherine Canete. The four-year-old loves nursery rhymes, music and cuddles. But the set up of her family’s living room tells a story that is anything but typical. “We converted it to a kind of mini intensive-care unit,” Catherine explains. Adrianna has Down syndrome. She was born with heart problems and suffered a stroke as a baby that caused a brain injury and seizures—up to 100 a day. For her first three years, she spent most of her time in SickKids’ hospital. Last year, in a bid to reduce her seizures, one side of her brain was surgically disconnected from the rest of her brain, and she did inpatient rehab at Holland Bloorview. She still has 20 to 50 seizures a day, but was able to return home in April. BLOOM spoke to Catherine about parenting a child with very complex medical needs.

Catherine Canete: She’s very social, and she loves music. She’s a very happy girl and she never cries or fusses. She loves the nursery rhymes. She loves to be cuddled. She’s had a growth spurt recently and gained so much weight, so that’s hard on my back. She has cortical vision impairment and bilateral hearing loss and is non-verbal. We’re working on her pressing a button to make a choice.

She’s fed by g-tube and has a suction machine and nebulizer and oximeter. I haven’t slept much lately because her oxygen has been desatting. Last Friday we were at SickKids and they found out she has clots around her neck and both right and left sides of her shoulders, and in her chest. I’m on a watch waiting for them to call me back with the results of her blood work. Anything can happen.

BLOOM: What has been the greatest challenge?

Catherine Canete: Her medical needs. She’s so complex. I’m a cardiac nurse, and you would think that was beneficial, but I worry a lot because I know a lot. The good part is that I think maybe I was kind of being trained [in my career] to handle her. She’s a tough one, and she needed me to be prepared for her.

BLOOM: What are the greatest joys?

Catherine Canete: She’s such a big blessing to us. Every time I see her, I can’t explain how much happiness that I have. I always have butterflies in my stomach because oh my God, she’s so beautiful for me. I want to celebrate the happiness and joy and strength that she gives and she shows. In all of my years nursing, I’ve never had a patient this strong. She’s such a fighter. I make sure she feels that I’m with her at all times. We kind of teach each other.

BLOOM: Have you found anything that helps you cope with all of her health challenges?

Catherine Canete: I take it one day at a time. The biggest way I cope is that I pray a lot. We don’t have that much support from family or friends. We have support from the medical teams at SickKids and Holland Bloorview. Our friends may have the best of intentions, but they’ll never understand the intensity of what we’ve been going through.

We are part of the complex care program so we are able to have nurses come and give us some respite so we can go out to buy groceries. Right now we don’t have nurses at night. I do worry that I’ll fall asleep and miss that she’s desatting.

BLOOM: What advice would you offer other parents in similar situations?

Catherine Canete: I think seeking help is a really good thing. No matter how much you know your child, you need extra hands. When someone offers help, take it. It’s a long journey and you need to protect your strength.

BLOOM: Where have you found support?

Catherine Canete: From all the groups on Facebook. The Down Syndrome Association of Toronto has been very, very helpful and supportive to our family. I’ve made a lot of friends on Facebook by chatting online and having discussions with people who are going through a similar journey.

I belong to groups for people with Down syndrome and traumatic brain injury and cardiac problems. They are the people who truly understand what we’re going through. Before COVID-19, we used to get together to celebrate the holidays with people from the Down Syndrome Association of Toronto. Even if we were in the hospital, we would ask for permission so we could join that group.

BLOOM: How have you been impacted by COVID-19?

Catherine Canete: We have been stuck for most of Adrianna’s life in hospital, so I don’t feel that much of a difference. What has brought a lonely or isolated feeling is that people are not able to come to us anymore. The therapists are not able to visit.

She was in a daycare before, but I was beside her because of her PIC line. They knew I was a nurse and were comfortable having me in the classroom. So while other parents dropped off their children and went for a coffee or to work, I was with her the whole time.

BLOOM: What do health professionals need to know about how to best support you?

Catherine Canete: First off, no matter what experience or background the parents have, being able to let the parents ‘vent out,’ or tell what they think is going on with their child, and hearing and affirming them. Whatever parents say, they’re not lying. There is something in what they’re saying. Some parents may not have a medical background, so it may sound like they’re overdoing the venting or being paranoid.

Also, when I see my daughter struggling and I’m full of emotions sometimes I get speechless, or I don’t want to deal with it anymore, and it gets overwhelming. Then I think of parents who can’t speak English, or who don’t know medical language like I do. I hope professionals could be more sensitive to these parents.

BLOOM: Have you ever had a time where you didn’t feel heard?

Catherine Canete: Yes. My daughter was either born with a stroke or had it a month later, but it wasn’t diagnosed until she was seven months old. I saw some indications that she was having a left-sided weakness, and I kept on telling therapists. They said maybe she is right-handed. As a nurse and a mom I kept saying ‘There’s really something going on.’ Finally, after months, I convinced them, and the moment they gave her an EEG, they said ‘How did you know?’ It was a slap on my face. I had been telling them for months. I have some guilt feelings about that. I should have been more of an advocate.

BLOOM: But they were the experts, and you were telling them what you were seeing.

Catherine Canete: Even if it was their fault, or they should have been doing their job, she’s my child, and at the end she’s the one who would be suffering. It’s frustrating.

BLOOM: What do you do to take care of yourself? It doesn’t sound like you have any time for yourself.

Catherine Canete: I wish I could have more time to sleep. That's why I'm having so many headaches. And also to do a bit of exercise for my back. I need more time for myself to rest and do some exercises. But Adrianna is not a straightforward child. She always has one thing on top of another. She’s had so many problems. Reflux, multiple aspiration pneumonias. After the hemispherectomy, she got hydrocephalus and needed a shunt. If a tiny number of people get some kind of complication, Adrianna will get it.

Because of COVID, when we have nurses come in I'm scared. I ask them to bring indoor clothes, so they change when they get here. That gives me some piece of mind. I give them a gown to protect themselves and they bring their own masks. I have lots of soap! Washing hands is very important.

One thing I really hoped was that the complex care program would be able to connect us with other families. I asked many times, but they said it was a privacy issue.

Another thing I was interested in was finding a family with a child with Trisomy 21 who had a traumatic brain injury. The surgeon at SickKids said this was the first time he had done the hemispherectomy procedure with a child with Down syndrome.

BLOOM: If you could change one thing about the health system, or about Holland Bloorview, what would it be?

Catherine Canete: Children like Adrianna need more access to the facilities. Like the Snoezelen room at Holland Bloorview. We need to pay for it, and it’s not easy for us to find ways to have it covered. Again and again we have to apply for funding for that. For a community of children like Adrianna, that should be funded.

We wanted her to use the virtual music instrument. She was able to try it once, but it’s expensive again to take lessons. I’d like better access to these activities that bring her joy. This is the only way that we would be able to make her happy.

There are so many things I would like to have for Adrianna. I’m hoping that I may be able to find a job where I could work from home. That way I don’t have to worry about leaving her behind.

I wish I can be of value to others, and that our experience can inspire other families in a way that they might want to connect with me.

If you would like to connect with Catherine, please e-mail lkinross@hollandbloorview.ca, and we will pass your message along.