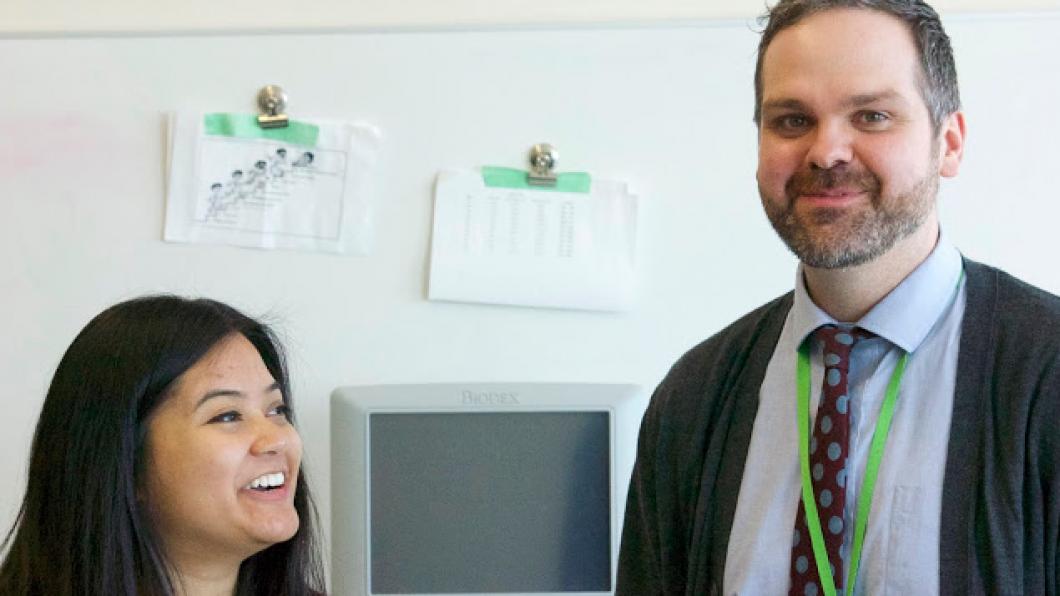 Nick turns to teens to help raise reporting of concussions

Nick Reed is an occupational therapist who joined Holland Bloorview as a research associate. In almost six short years, he’s become a senior clinician-scientist, co-director of our pediatric concussion centre, and most recently, the Holland Family Chair in acquired brain injury. He’s passionate about bringing an occupational therapy lens to rehab for children with sports and other concussions.

It all began when he followed a youth hockey team for a season as part of a graduate research project. Nick put sensors in the players’ helmets, then tracked the number of times they were hit in the head, and how hard. “That opened my eyes to what research could be,” he says. “There weren’t a lot of occupational therapists working in pediatric concussion. I saw it as an opportunity to carve out a niche.” We spoke about his early days and how he’s grown Holland Bloorview’s concussion centre into an internationally recognized leader.

BLOOM: How did you get into the field?

Nick Reed: Growing up I played every sport under the sun. I started lacrosse at age five and played through university and Junior A and was drafted into the National Lacrosse League. So sports were big for me, and I always had injuries. I thought I wanted to bring health care and sports together, and that I’d go to med school or physio school.

One night in third year of my undergrad, I went to an information night on physio. But they ended up presenting first on occupational therapy. It blew me away: This idea that a knee isn’t just a knee—it’s a knee on a body on a person in a family in the community. Thinking about this holistic focus on the person and asking the person what they need—not making assumptions—excited me. I took the leap and changed my plans.

Nick Reed: A busy one. It’s an exercise in prioritizing across different demands. I’m no longer directly in the clinic but I support our clinics with advice and integration of research. In the early days it was the physicians and me—I was the rehab team. As the clinic grew and we secured more funding and brought on more staff, my role transitioned to focus more on the research, teaching and advising.

BLOOM: One of the clinics it the persistent symptoms clinic.

Nick Reed: It’s our flagship clinic. It’s a globally funded outpatient clinic for kids who have had concussion symptoms for four weeks or longer. We also have an early care clinic that is fee for service for children with a concussion that’s four weeks or less old. They come in to get diagnosis, consultation and rehab.

While I advise these clinics, the majority of my time is spent growing and directing our research program as a clinician scientist.

BLOOM: Can you tell me about that?

Nick Reed: It’s quite large. We have about 20 projects, and five or six of them are major grants. The one I’m most excited about now is a Canadian Institutes of Health Research grant. We want to extend our thinking in novel ways about how to raise awareness of concussions and change behaviour in reporting them among youth.

BLOOM: Why is there still a problem with teens pretending they’re okay when they’re not?

Nick Reed: There are two reasons. The sport culture of never being allowed to be hurt: ‘Just rub some dirt on it and get back out there.’ I had my own concussions, and we didn’t talk about it, we just kept playing. And people didn’t know a lot about concussions—they didn’t know the signs and symptoms.

Eighteen high schools across Canada will be part of a project we’re launching in September. We’ll be getting them to create concussion clubs—to raise awareness of symptoms and what to do, and to provide support to peers who have concussions. Young people will come up with creative and relevant and meaningful ways to educate their peers.

All through this process we’ve had high school students tell us what works and what doesn’t. They’re co-investigators. For example, we created an online portal to support them, and we thought it looked amazing. We took it to a local high school that has a cyber arts program to get their opinions and they didn’t like it at all.

Nick Reed: They said the colours and feel were too corporate. So we handed over the reins to them and they came up with a whole new colour scheme, logos and flow. One of our family leaders—Gideon Sheps—linked us to that high school. It goes back to that occupational therapy idea of anyone you sit down with is the expert in their own domain. The real strengths come from the person we engage with—whether it’s clinically, or in this case youth in their high school.

BLOOM: What’s the greatest joy of your job?

Nick Reed: People. Engaging with people and watching and supporting people do amazing things. Whether that’s working with and learning from my PhD and master’s and undergrad students, watching them develop and grow and become inspired. It’s a dream, a real luxury of academia. You’re able to build relationships over time, over years.

And it’s not as ‘I’m a supervisor,’ but ‘We’re in this together. I’m learning from you as much as you from me.’ Working with people—whether it’s with sports organizations in the community, schools or youth or family members—is what drives me to get up every day. To be part of a team and engage as many people as possible in a meaningful process that will make a difference.

BLOOM: What is the greatest challenge?

Nick Reed: My role is unique. I’m not just a scientist, or a clinician or an educator. I see myself as all of these things, and we’ve attempted to design our program to integrate all of them. We want to break down the silos. So trying to bring it all together is the greatest challenge. You can’t do meaningful research without the knowledge and experience of sitting down with the families who need it. We’re here to help at every step of the way, be it in our clinics, or through the research and education and support. But these programs fall under different areas in the hospital. So it’s trying to integrate them so we have proper communication and all work together.

Nick Reed: There are two ends of the spectrum. One is that continued thinking that ‘it’s not a big deal.’ It is a brain injury and it’s a serious injury if you don’t receive medical attention and diagnosis, so you have the potential to prevent repeated injury.

On the other end of the spectrum is hysteria about concussion. We read a lot in the media about brain disorders like depression and Alzheimer’s, or we hear about a professional athlete with serious issues who has died by suicide. A parent may feel ‘If my child has a concussion, everything will change forever.’

We need to tailor a message to land in the middle. It is an injury you want to get treated, and to have rehab support along the way. But it’s also an injury we can manage, for the most part, for most kids. About 70 per cent of kids will feel well within a month. The probabilities of getting back to what you love to do are extremely high.

BLOOM: What emotions come with the job?

Nick Reed: Being in academia and health care, there are always challenges with regards to funding, or to sustaining a program. But I’m a very positive person and I’m always optimistic. That’s good for someone in my role. I truly believe if you put good stuff out, that good stuff will come back. And if you co-create with the people who need it, you will do work that matters.

BLOOM: Do you have problems with overworking?

Nick Reed: I do wear a lot of hats and have a crazy schedule. I think we all do. There was one time two years ago when I got shingles and my body shut down. I had three little kids at home, and I was balancing that with work and my personality of ‘go, go, go.’ I live off adrenaline. I don’t have caffeine, but I get up early, at 5:30.

Three days a week I go to Variety Village. I run the track, do a little bit of weights or play a bit of basketball and swim. I need to be home by 7 to make my kids’ lunches. The other days I tend to get up early and work, either at home or here. Physical activity is a big part of my life. My father had a heart attack at 45, when I was in early high school, and he did his rehab at Variety Village. I really appreciate the opportunity there for my family to be exposed to individuals of all abilities and ethnicities and cultures. I get great questions from my kids, who are seven, five and three.

BLOOM: If you could change one thing about children’s rehab as it applies to concussion, what would it be?

Nick Reed: It’s what we’re trying to do—really focusing on the child. So having the perspective that what this child needs, and loves to do, really matters. They have an opinion, even if it’s a little guy, and we need to engage the child actively in rehab. I’m really proud that we do that at Holland Bloorview, and not just in concussions. We need to move past a focus just on symptoms like headaches to ‘How do you feel? What do you want to do today? What can I do to help you do the things that make you happy?'