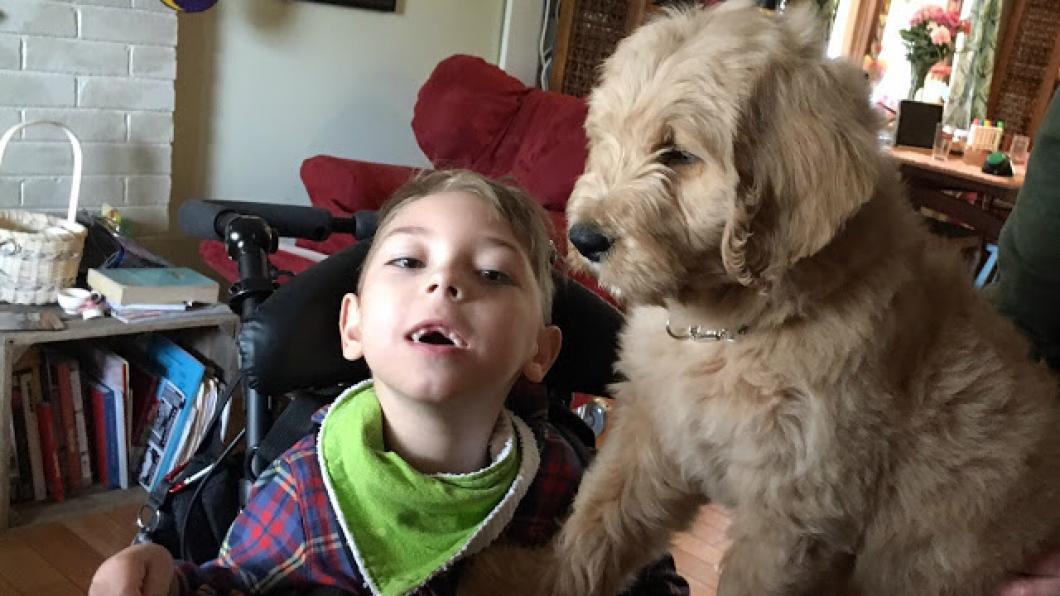 How one family's dream of a service dog came true

I knew Sebastian needed a dog when he was two. He was recovering from pneumonia in hospital, and we hadn’t seen him smile in a week. Then the hospital therapy dog arrived and he beamed.

Four years later I applied for a service dog for Sebastian, only to be heartbroken when he was turned down.

I’d spent months on the 15-page application for a dog trained in seizure assistance. But five minutes after the charity received my package, I got an e-mail saying Sebastian didn’t qualify. Because Sebastian is dependent on others for everyday tasks, they said he was incapable of bonding with a dog.

I was appalled. How could they be so dismissive? Without even meeting Sebastian, or our family, they’d made a decision based on paperwork. Sebastian had already developed a great relationship with a therapy dog at his preschool, so I knew he could bond with a dog of his own. And he wanted one. He’d started to tell his teacher and classmates at senior kindergarten that he had a dog at home because he wished it so much.

I didn't give up and extended my search to organizations throughout North America. I spoke to a few groups that have families fundraise to cover the cost of the dog and training. But the family also needs to cover travel costs for the trainer. Training alone can cost up to $30,000.

There were also organizations like the first charity we tried, where you apply and, if accepted, are put on a two-year wait list. Unfortunately, we didn’t qualify based on our location. I wasn’t sure what to do. I spoke to everyone—even my hairstylist!—to brainstorm ways to get a dog and cover the training.

Our search led us to a woman named Sherry at Swissridge Kennels. Each year she donates a dog to a family in need and organizes a fundraiser to help pay for the dog's training. Sherry breeds Goldendoodle and Berndoodle puppies. I sent her a letter introducing ourselves and asked about that year’s fundraiser. I learned we were in the running! After a few emails back and forth, Sherry came for a visit. She even brought a few dogs to meet Sebastian. It was an exciting day for the whole family! After our meeting, Sherry decided that Sebastian would be a good fit for one of her puppies.

Sherry wanted to wait until the litters would be born in the spring to choose the right puppy for Sebastian. It was a long winter! When we returned from our trip to Australia in May, Sherry had a visit planned to bring along one of the other women who helps with the Swissridge Doodle Romp charity, Karley. To our great surprise, when we opened the door we were greeted by Sherry, Karley and a new Goldendoodle puppy!

Sebastian and this puppy immediately bonded. We were over the moon. There would still be a long wait with training ahead but Sebastian had a service dog! Over the next two weeks we went through every name we could think of before Sebastian chose Ewok.

Ewoks are a race of Star Wars' creatures who look like furry teddy bears and have their own language. I used to call Sebastian my little Ewok when he was a baby because of the sounds that he makes (since he doesn't use words like we do). I showed him a video of an Ewok and asked if he thought the puppy looked like it, and whether it would be a good name. He said yes!

Ewok currently lives with a family to do his imprint training, which is the basic house training, obedience and socialization stuff. He’s started to work with the trainer and soon will live with him full-time for more intensive training to become a therapy and seizure alert dog. Once Ewok is ready, we’ll join in the training sessions twice a week. Then Ewok will come home with us, but we’ll continue to go back to Swissridge for training as needed.

This year the Doodle Romp raised over $25,000. We will not need to personally fundraise or contribute financially to Ewok’s care and training. We are so thankful to have been welcomed into this caring community. While at the romp several photos were taken and one now hangs on Sebastian’s wall while he waits for Ewok to come home.

We’ve talked a lot with Sebastian and his sister, Tallula, about what having a service dog means. We have talked about how Ewok will be Sebastian’s dog. He will sleep in his room. He will go for walks with Sebastian and Sebastian will be in charge of feeding him and giving him water, with our help. We are even programming commands for Sebastian to say to Ewok using his eye gaze with the goal that the trainer will use clips to help Ewok become familiar with Sebastian’s "voice."

We hope that Ewok will help break social barriers while we’re out. We also look forward to Sebastian feeling a bit of independence as it will be his job to care for Ewok. Most Toronto parks are not inviting to kids using wheelchairs. As Sebastian gets bigger it is more difficult for him to be carried up and down the slides and sometimes even the inclusive swings are broken from misuse. Soon Sebastian will have an alternative. He can take Ewok to the dog park!

I grew up with dogs in our home. When I was 11, I even had the opportunity to choose and care for my own dog. Having a dog certainly adds responsibility and creates a life change. But for our family, for Sebastian, I can only see that as positive. Sebastian’s whole face lights up when we talk about Ewok. He loves telling friends and people he meets about his dog. We get video and photo updates every couple of weeks from the family he’s living with, and they’re often the highlight of Sebastian’s week. Sebastian asks questions to learn more about Ewok and what he’s learning, too.

Ewok will be trained to walk alongside Sebastian. He will nudge Sebastian’s head up when Sebastian is tired and his head control wavers. We hope he will be able to notify us if Sebastian is having a seizure during the night or otherwise needs us. He will provide Sebastian a companionship that he will find nowhere else. He will also provide Sebastian a sense of responsibility and independence. Having a dog will help others see that Sebastian is a kid—a kid who loves a dog and loves life.

We don’t have a home date for Ewok because his trainer wants to make sure Ewok is ready for us and we’re ready for him. But he's already part of the family. 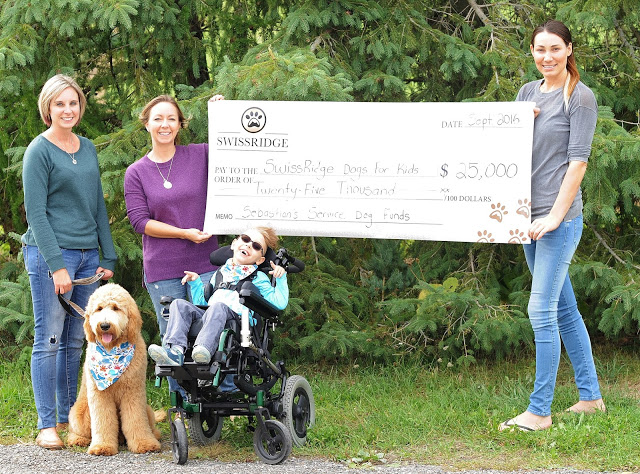