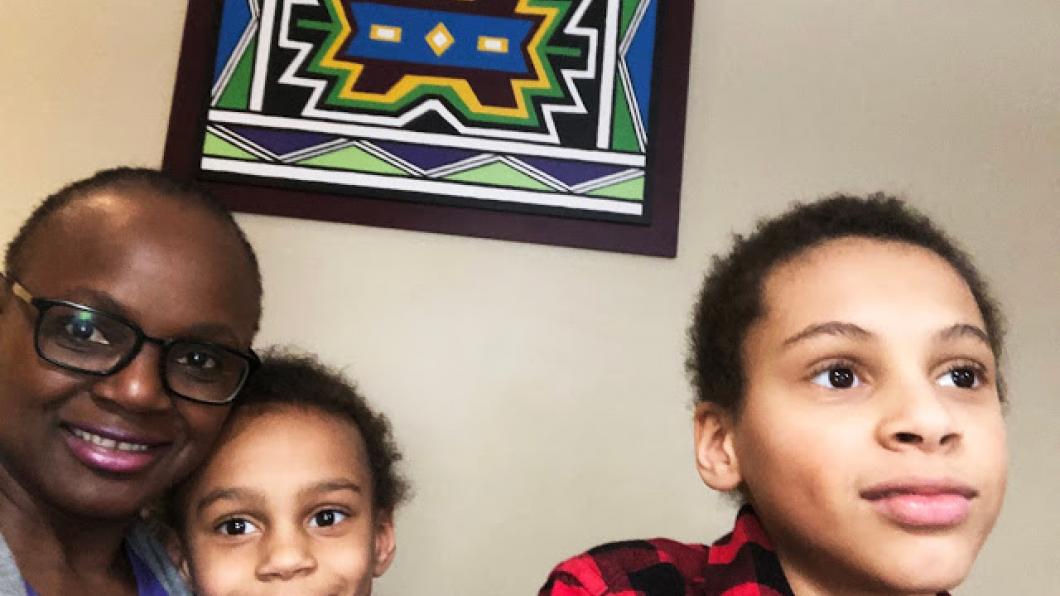 'Being a black male is...a safety issue over and above autism'

Many of you know Amy Ma, who is chair of the family advisory council at Montreal Children’s Hospital.

Recently, Amy told me she'd heard a parent speak at a Black History Month event about her fears for her sons, who are black and have autism, and the racism and ableism they will face.

That parent is Sazini Nzula, and she lives in Montreal. Sazini has a PhD in medical microbiology and worked for years as a scientist. Sazini has two sons—Ethan, 11, and Jayden, 7. After Ethan was diagnosed with autism, Sazini trained in Qigong Sensory Treatment, a type of evidence-based massage that helps reduce sensory issues in children with autism. “At the time, we had to wait two years to get an autism diagnosis in Montreal, and another two years to get government help,” Sazini says. “This was a method that parents could use by themselves while they waited.” While teaching parents, Sazini was inundated with questions about other aspects of parenting children with autism. She now provides personal coaching to parents. Her book Beautiful Inside and Out: What You Ought to Know about Autism was just released. We spoke about Sazini's experiences with stigma related to race and disability.

BLOOM: Can you describe how Ethan and Jayden are affected by autism?

Sazini Nzula: Ethan still has language delays and only really began speaking when he was about nine. Before that he could say words, but now he actually talks. He has huge sensory challenges, which are better than before, and trouble with self-regulation. He has issues with behaviour and last year at school was horrible for him. This year is going well.

BLOOM: What has your experience been with stigma related to disability and race?

BLOOM: How are they different?

Sazini Nzula: In the black community it’s about having an invisible disability to do with the mind. I’m African, and it doesn’t matter how educated people are, there's still a tie to traditional African beliefs about witchcraft, because it’s scary and they can’t see it, so they don’t understand it. When it’s a physical disability that you can see, they can process that better. But if the mind is different in some way, it must be because of an evil omen.

BLOOM: I’m recalling now a story we did with a Nigerian mother who explained that disability is viewed as a taboo there, as something evil that brings shame on a family and is caused by the parents. Do you find that even when Africans have been Westernized, that some of these traditional beliefs are still deeply embedded?

Sazini Nzula: Absolutely. When Ethan was two I met a man who was educated in the medical field, and he told me he hadn’t told his brother that his child had autism, and the child was nine. I did some research and learned that in Nigeria and Kenya, surveys of doctors, special education teachers and social workers found these traditional beliefs about disability are still there. The stigma of disability is also a huge problem in Japan and South Korea.

BLOOM: I remember a parent here who explained that when her child was born with disability, for the first year, they were unable to tell anyone in her husband’s family, because of how disability was perceived in his community. So they had to make intricate excuses to prevent that side of the family from meeting the baby in person.

Sazini Nzula: In the part of Montreal that I live in, there aren’t that many black people. I remember meeting a Haitian social worker at a cultural event, and she told me that families were happy to speak with her about their children with autism, but they didn’t want other families in the community to know. So they wouldn’t come to events for families.

BLOOM: How do you deal with the stigma of disability in the black community?

Sazini Nzula: I chose not to let it affect me. I chose to tell everyone that my children have autism. I don’t have to hide it and there’s nothing to be ashamed of, in the same way that I wouldn’t be ashamed if my sons had diabetes.

What impacts me is stigma in the general community. For example, one time we were in a supermarket and my older son got separated from us. He can’t speak French and we live in a francophone province, so he pushed past someone to come and join me, and this woman went on and on about how he’d been badly raised, and how in this country we teach our kids manners. But my kids were born here. Had my son been a white kid, she probably would have said something similar but not ‘in this country.’

As my son gets older and taller, I started to be afraid of being outside. When I was at the Black History Month event, I talked about how we came home one night at 5:30, and it was getting dark. My son was having a hard time and he was running down our street. He ran past the two neighbours I know very well, who understand his issues.

My first thought was what if someone calls the police, and says ‘there’s this black kid in the dark running down the street.’ We have a police station within walking distance. I thought if the police got to him before me, there was a chance that things would not have gone well. Being a black male is definitely a safety issue over and above having autism.

BLOOM: We’ve certainly seen stories of autistic youth or adults who are assumed by police to be doing something illegal, because they won’t comply with what the police ask, or they have certain behaviours, or they aren’t able to explain their situation.

BLOOM: I understand you have tried to develop a relationship with the police?

Sazini Nzula: I’ve been taking my kids to the local police station since my son was four. My idea was to get my kids used to seeing the police as their friends, and to develop a relationship with the community relations officer, so that if anything happened in our neighbourhood, they would be the first to respond.

I called and explained I had a kid with autism and was wondering if I could drop by. I said I was teaching my son that police are safe people they can approach. Our experiences were good. What I’d love to do in future is go and do an actual presentation.

BLOOM: What advice would you give other parents raising black children with autism?

I have a nephew who is able-bodied and well functioning, and I’ve seen situations where he’s not treated well by police, and he’s done nothing. When I put the disability on top of being a tall, strapping, black male, we really have to be aware and be vigilant and empower our kids.

BLOOM: Do you talk to your sons about racism?

Sazini Nzula: With my older son, he’s not at a level of social awareness where he would notice if it happened. So for now I tell him if he feels he’s in trouble or not safe, to call mommy or to call the police. We’ve talked about calling 911 in an emergency, and my kids are good with numbers and use their cell phones.

In Grade 1, a student told my younger son ‘brown people are dirty and stupid.’ So I did talk to him about race. In his school, which is a public school, there aren’t that many people who aren’t white.

BLOOM: I loved one of your blogs where you talked about having a jar that you regularly drop memories of awesome things your kids do into. Can you explain?

Sazini Nzula: It’s a way to focus on the good things. Last year, when I think of my older son’s school year, I remember all of the calls from the psychologist, all of the meetings, and all of the really negative stuff. Plenty of awesome things happened, but I can’t tell you specifically what happened at school.

I thought this year I’m going to make sure I remember. Yesterday, we went to see the movie Peter Rabbit. For us, that was the first time we saw a movie that’s not adapted. It was for anyone, and there were lots of kids, and the sound wasn’t reduced. My son sat through, even though he forgot his headphones. That was awesome for us.

So I write the date on a sticky paper and write something that stands out, and drop it in the jar. I think it will make me even more aware of when awesome things happen. I’m capturing them, and I appreciate them more.

My plan is that if we go through a really challenging time during the year, I will pull them out to read and remember all of their victories. And certainly at the end of the year, we will read them to remember what happened.

BLOOM: You just released a book. What's it about?

Sazini Nzula: It’s to acknowledge that it’s difficult, but that as parents we need to embrace the uniqueness that our kids bring to the table. One of the subtitles is: ‘How to embrace the unique way your child is flourishing.’ So the message is that you need to go with your child, whoever they are, and still live your dream.

BLOOM: Is the book only relevant to parents of children with autism?

Sazini Nzula: No, it’s useful for parents of children with other disabilities. There’s a practical chapter, for example, on preparing your kids for adult life, and preparing yourself, the parent, with financial and estate planning.

BLOOM: Do you talk about race in the book?

Sazini Nzula: I do talk about the stigma of autism or disability, but not in the way of race. I have a chapter called ‘Life in An Autism-Unaware World.’ I had originally written about race, but the editors suggested I make it more relevant to everyone and I took it out. I plan to publish those sections on my blog instead.

BLOOM: I think there would be a real appetite for your writing in that area. I know I’d be interested!