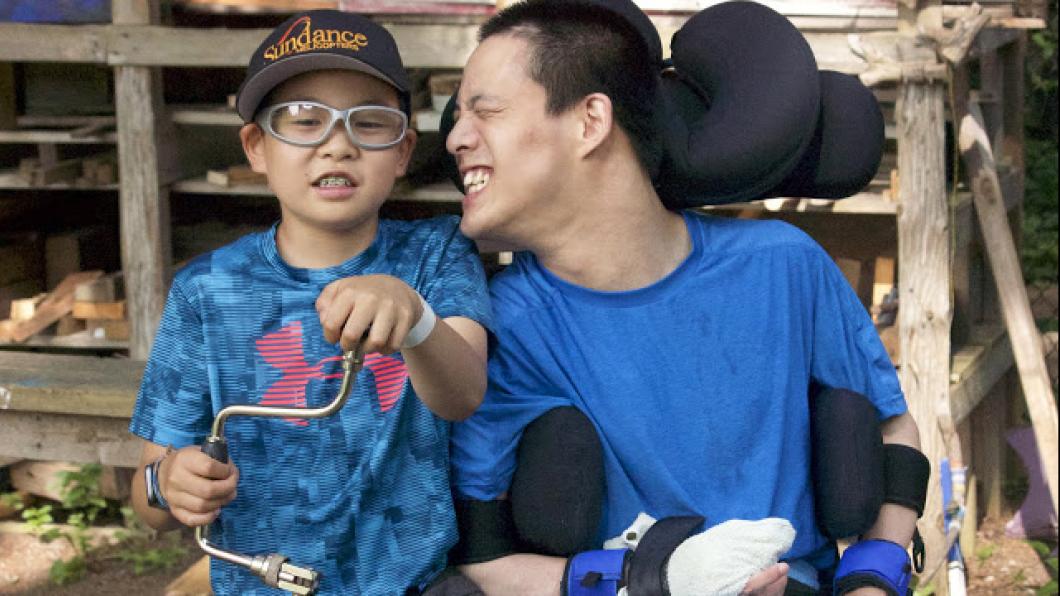 This summer is bittersweet for brothers Osmond (above right) and Edmond Shen (left).

That’s because it’s the last one they’ll spend together in Spiral Garden.

Osmond, who is 21, has been attending the artist-run camp in the ravine behind Holland Bloorview since he was five, and is graduating out of the program. Edmond, now nine, has been coming for four years.

The camp brings children with and without disabilities together under a canopy of trees to tend an accessible garden, sculpt clay, work wood, make puppets and tell stories.

Each brother has a different passion. For Edmond, it’s gardening. “You get to water plants and help,” he says.

For Osmond, it’s woodworking. Osmond envisions finished products—like a stand for his Nintendo DS, a wheelchair cup holder or a robot—and directs Edmond in how to execute them. “A lot of youth come for an hour and go, but Osmond is determined to stay until his project is finished,” says Brendan Byrne, one of the counsellors.

On the day we met, Osmond had Edmond sawing a thick branch into small circular pieces to form the four wheels he wanted on his robot. “He’s the boss,” Edmond says.

“What I like about this camp is that it teaches ‘normal’ kids about disabilities,” Osmond says. He and Edmond also appreciate the open schedule. “You can go anywhere you want, and do anything you like,” Edmond says. “At my other camp, we had a schedule, and we had to do this, then this, then this.”

Edmond says one of his favourite parts of camp is going to the hospital cafeteria for lunch. “Osmond takes me for lunch, and I get to have a hot lunch.”

Osmond encourages other families to send their child with a disability with his or her brothers and sisters. “It’s a great opportunity for siblings,” he says.

The camp, which welcomes over 200 children and youth each summer, is donor-funded through our foundation.