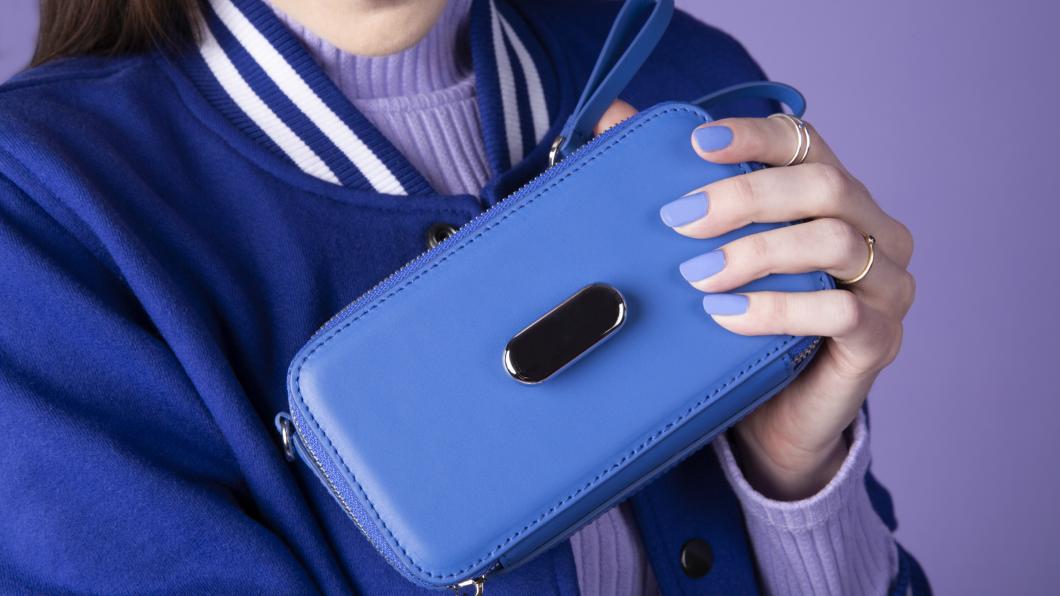 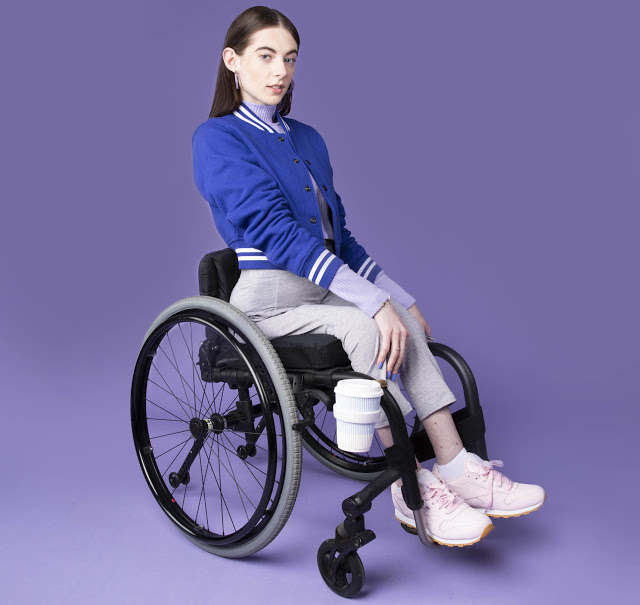 It’s a bit of bling for the wheelchair, and security and control for the user.

Lucy Jones—named one of the world’s brightest entrepreneurs by Forbes magazine in 2016 for designing clothes for people who use wheelchairs—launches a new line of wheelchair accessories today in New York City.

A small US$49 metal clamp with a dock that fits on manual wheelchair tubing is being sold with two leather clutch bags and a cupholder that attach with magnets. It allows you to snap and secure a bag or cupholder to your wheelchair.

The smaller bag—available in electric blue, hot pink, tangerine, yellow and black—is perfect for credit cards, keys, a phone and cash. It costs US$108. The slightly larger black bag is made for people who want to carry more makeup, or other stuff, close by. It goes for US$138. Check them out in this video.

“In focus groups, people were often telling us that they were sitting on their phone or wallet or keys, because they had nowhere safe to put them,” says Lucy, whose new company is calledFFORA. “That could cause pressure sores.”

Other people carried things openly in their lap. Lucy recalls that one of her friends, who has multiple sclerosis, used to ask her to go into her bag, which was hanging on the back of her chair, to get things. “I often wondered, ‘How is this safe?’ The community wanted fashionable bags, but they often had to jury-rig them, or hack them, so that they fit on their chairs.”

Lucy says it was a challenge to make a clamp that was light, sturdy and small, and something people would want to leave on their wheelchair. Early users say the product, which comes in champagne, silver and midnight black, “looks like a piece of jewellery.”

When attached, the dock swivels at 360 degrees, so users can position it in a way that doesn’t interfere with their movement. “It can go anywhere along the lower wheelchair tubes. We have one guy who places it behind his leg, and others who have it up high beside their knee cap facing forward, and others who position it outward.”

Lucy, and her team at FFORA, had to create a product that would work with seven different wheelchair tube sizes. “We’ve created seven different silicone inserts,” she says. “On our website, the customer will check their wheelchair model and brand, and when the product is shipped, it already fits their chair.”

About a dozen wheelchair users aged 22 to over 60 trialled the products for a week at a time, then came back to review what worked and what needed tweaking. “One of their biggest asks was that we make something that was functional and easy-to-use but also cool and stylish, something that their sister or mom might want to use too,” Lucy says. “If you don’t have a disability, and love the bag, you can wear it across your body with a strap. These bags are competing with the rest of the small leather bags market.”

Also in the line is a US$25 cup holder that fits in the wheelchair dock—so you can take your coffee with you, and not worry about spills.

The new line only ships in the United States, but FFORA hopes to expand to Canada and Europe in the next year. Lucy and her team are working on ideas for products targeted to kids. “Imagine Disney or Marvel. Imagine if we could get a license, so a child could have their super hero character in a cup design?” Plans are in the works to create an attachment that fits on electric wheelchairs and scooters too.

In 2016, BLOOM interviewed Lucy about her clothing collection called Seated Design for wheelchair users. She developed it as a graduate student at the Parsons School of Design in New York.

Lucy says she named her new company FFORA to recognize all of the wheelchair users she’s worked with. “When we had focus groups, it felt like this was a real honest place where people could make their opinion heard,” she says. “It was a forum. I didn’t like the word ‘forum,’ so I changed it to fora, which is the plural of forum. Then I added the double F, purely for selfish reasons. I’m Welsh, and I wanted to make the word look Welsh. In Wales, there are a lot of double Fs that make the ‘F’ sound. I thought it would be unique. Now we think of the two Fs as symbolizing fashion and function, or form and function, and being future-forward.”