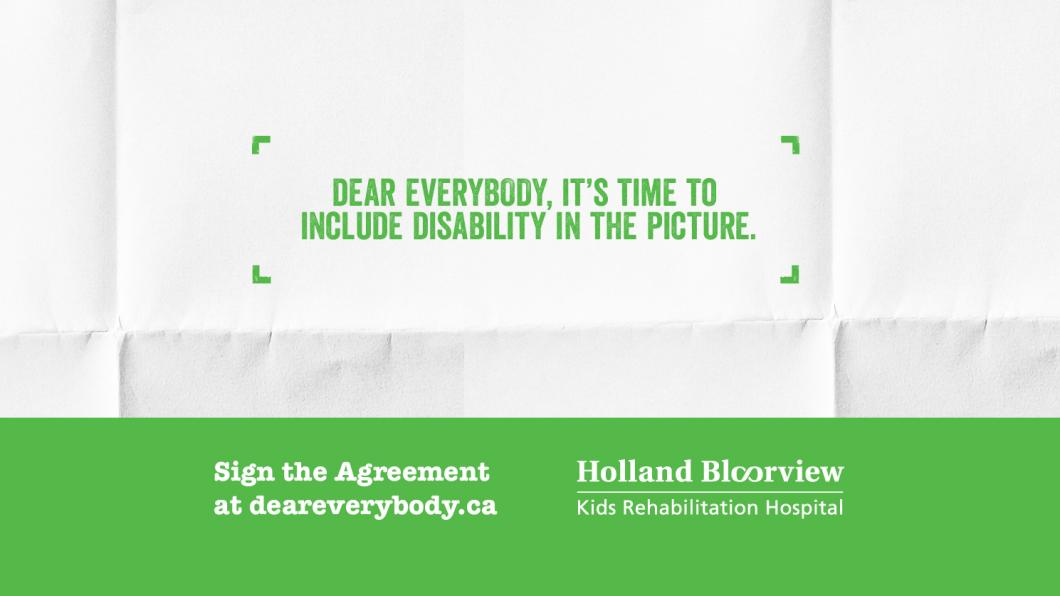 TORONTO, ON (August 26, 2019) – Holland Bloorview Kids Rehabilitation Hospital (Holland Bloorview) today launched year three of its Dear Everybody campaign, which aims to create a shift in the media landscape by challenging brands and companies to include disability in their advertising. Dear Everybody is a national campaign designed to challenge and help end stigma towards kids and youth with disabilities.

“With 22 per cent of Canadians living with disability, we need to do a much better job of representing this diversity in mainstream media,” said Julia Hanigsberg, president and CEO, Holland Bloorview. “This year we’re inviting Canadians to join us in the call for inclusive representation in the media landscape by signing the Dear Everybody Agreement.”

Visit deareverybody.ca to call for disability inclusion in the media.

According to a recent survey of Canadians by Leger, 60 per cent cannot recall seeing any representation of disability in advertisements in the last 12 months.

Turns out, a more inclusive approach to advertising is also good business. In fact, 70 per cent of Canadians said that it is important to them that a brand shows diversity in their advertising, including representation of people with disabilities. Encouragingly, almost 60 per cent also said that they are more likely to buy a product or service from a brand that includes diversity.

The absence of inclusive imagery also applies to the entertainment industry. According to recent studies, only 2.7 per cent of characters in the 100 highest-earning movies of 2016 had a disability. Similarly, of the regular characters on prime-time TV in the 2018/2019 season, only 2.1 per cent did.

A few of the youth profiled for the campaign this year:

“Everybody needs to see the depth of a character outside of their disability,” said Tai, Holland Bloorview ambassador. “I’m not socially affected by my disability and I think more roles and opportunities need to be created in the media where disability isn’t just the sad backstory.”

For more information about the campaign, visit deareverybody.ca and follow the #DearEverybody conversation on social media. The public can engage with Dear Everybody at an installation displayed at the CF Toronto Eaton Centre from September 20-22.

About Holland Bloorview Kids Rehabilitation Hospital
Holland Bloorview Kids Rehabilitation Hospital creates a world of possibility by supporting children and youth living with disability, medical complexity, illness and injury. Holland Bloorview is a top 40 Canadian research hospital that is fully affiliated with the University of Toronto and serves over 7,500 families annually. Providing both inpatient and outpatient services, Holland Bloorview is renowned for its expertise in partnering with clients and families to provide exceptional care and is the only organization to ever achieve 100 per cent in two successive quality surveys by Accreditation Canada. Holland Bloorview is a founding member of Kids Health Alliance, a network of partners working to create a high quality, consistent and coordinated approach to pediatric health care that is centred around children, youth and their families. For more information or to donate, please visit hollandbloorview.ca or connect on Twitter, Facebook, Instagram, LinkedIn and parent-blog BLOOM.