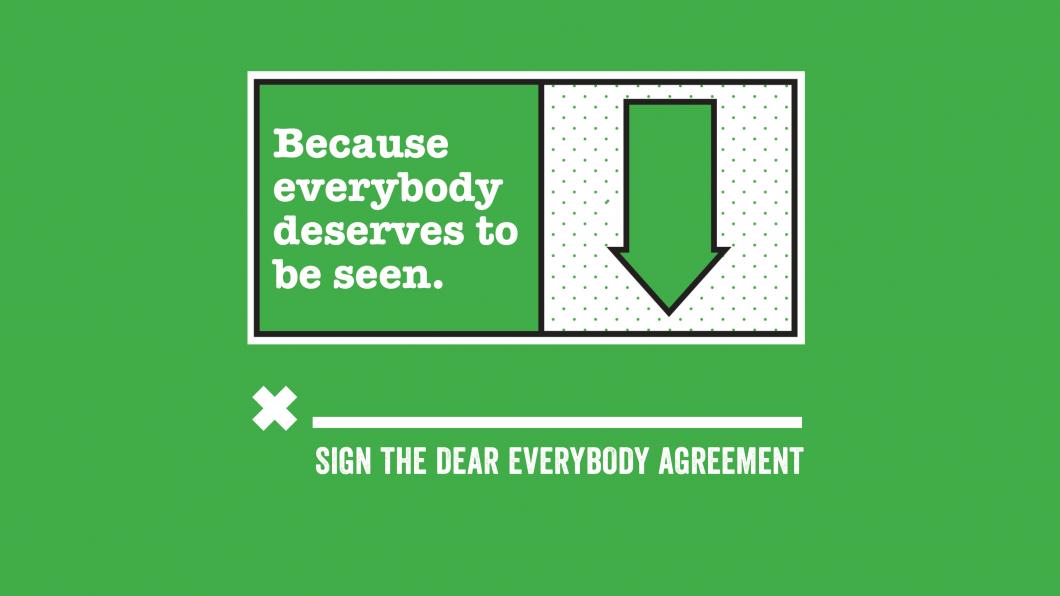 Holland Bloorview Kids Rehabilitation Hospital launches fourth year of its Dear Everybody anti-stigma campaign asking Canadians to speak up about disability inclusion in media and beyond – Rogers, Rogers Sports & Media, and filmmaker Arshile Egoyan are the latest to join the movement.

TORONTO, ON (August 31, 2020) – Holland Bloorview Kids Rehabilitation Hospital (Holland Bloorview) today launched year four of its Dear Everybody campaign which challenges brands, companies, and content creators and distributors to include disability in their public-facing channels. Building on last year’s theme around creating a shift in the media landscape, this year highlights the reasons why representation is important with bold “because” statements. Dear Everybody is a national movement designed to help end stigma towards kids and youth with disabilities.

“Everybody wants a chance to be heard and everybody wants a chance to be seen. But for 6.2 million Canadians, those chances are too few and far between,” said Julia Hanigsberg, president and CEO, Holland Bloorview. “Even the smallest of actions can have a big impact so we’re inviting you to join the movement by signing the Dear Everybody Agreement and by challenging your own social networks to call for disability inclusion.”

Visit deareverybody.ca to sign the Dear Everybody Agreement and use our Dear Everybody stickers in your Instagram stories to challenge images or scenarios that lack representation, and applaud ones that do.

As the campaign celebrates its fourth year, it is proud to announce a number of new Dear Everybody Agreement signatories, including our first telecommunications partner Rogers and first media broadcast partner Rogers Sports & Media, in addition to Canadian filmmaker, Arshile Egoyan.

“We are proud to be working with Holland Bloorview on this important initiative,” said Nancy Thomas, Vice President, Brand, Rogers. “One of our core values at Rogers is embracing and celebrating diversity and that is something that we honoured through our What We Bring campaign earlier this year. With this pledge, we commit that the diversity of our team, our customers, and our country will not only be reflected, but celebrated in our advertisements and marketing materials at Rogers.”

“At Rogers Sports & Media, we are committed to ensuring that our casting and creative for television, out-of-home, digital, and social advertising across all of our brands are representative of the entire Canadian population, and this includes people with disabilities,” said Andrew Sutherland, Vice President of Marketing & Creative, Rogers Sports & Media. “We are incredibly fortunate to be able to partner with the outstanding team at Holland Bloorview to create a more diverse and inclusive casting talent pool.”

Egoyan is in post-production on a short film that he wrote, directed and produced, called ‘Absence’. Starring a Holland Bloorview client, Julian Cappelli, who was born with cerebral palsy, the film is centred on differently-abled Andrew, whose mother disappears without a trace, leaving his grandmother and estranged aunt to care for him while negotiating new responsibilities.

“The Dear Everybody campaign became the backbone of this effort,” said Egoyan. “In ‘Absence’ there was an opportunity to actively realize the campaign’s mandate of creating visibility for people who are differently abled in media. Our number one priority was ensuring that Julian felt he was in good hands – Julian’s number one priority was delivering an astounding performance which inspired everyone on set to meet his level of commitment.”

According to a recent survey by Leger, awareness of the need for diversity in branding is rising, with three-quarters (75 per cent) of respondents now saying it is important for Canadians with disabilities to be featured in public-facing media (vs. 70 per cent in 2019).

The absence of inclusive imagery also applies to the entertainment industry. According to recent studies, only 2.7 per cent of characters in the 100 highest-earning movies of 2016 had a disability. Similarly, of the regular characters on prime-time TV in the 2018/2019 season, only 2.1 per cent did. Also, 2019 research reveals that its respondents support accurate portrayals of characters with a disability versus a show where a non-disabled actor is cast in that same role.

Two of the several youth profiled for the campaign this year:

For more information about the campaign, visit deareverybody.ca and follow the #DearEverybody conversation on social media. The creative for the campaign was done by the Toronto-based arm of global agency, Forsman & Bodenfors. The public can engage with Dear Everybody on a virtual discussion panel about the importance of disability representation in media on September 10 from 12-1 p.m. Visit deareverybody.ca for details.

Holland Bloorview Kids Rehabilitation Hospital creates a world of possibility by supporting children and youth living with disability, medical complexity, illness and injury. Holland Bloorview is a top 40 Canadian research hospital that is fully affiliated with the University of Toronto and serves over 8,000 families annually. Providing both inpatient and outpatient services, Holland Bloorview is renowned for its expertise in partnering with clients and families to provide exceptional care and is the only organization to ever achieve 100 per cent in two successive quality surveys by Accreditation Canada. Holland Bloorview is a founding member of Kids Health Alliance, a network of partners working to create a high quality, consistent and coordinated approach to pediatric health care that is centred around children, youth and their families. For more information or to donate, please visit hollandbloorview.ca or connect on Twitter, Facebook, Instagram, LinkedIn and parent-blog BLOOM.