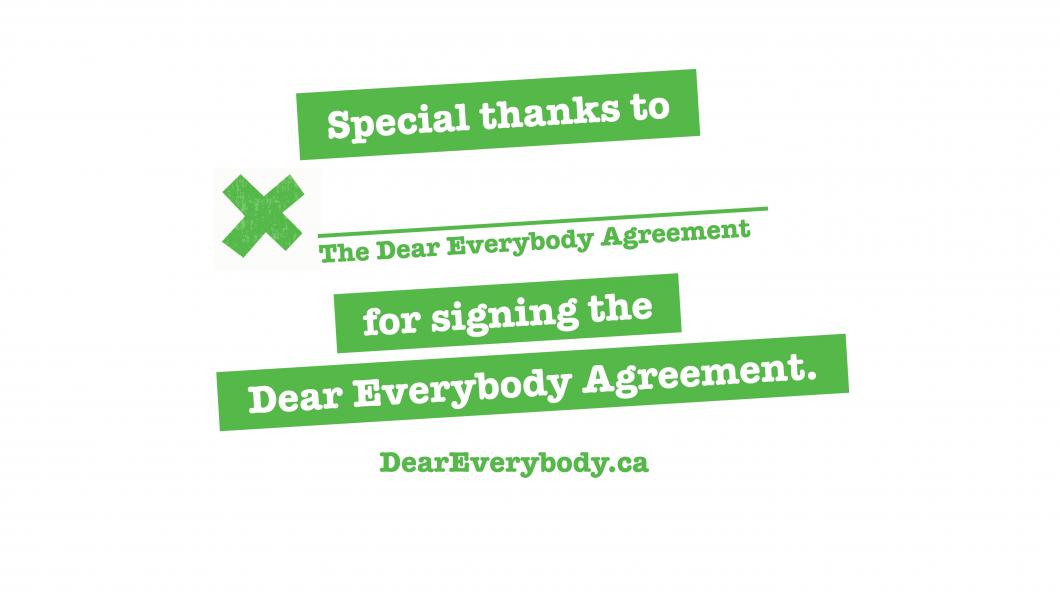 Holland Bloorview Kids Rehabilitation Hospital and Forsman & Bodenfors launched national movement to include disability in media landscape and over 20 companies have responded.

TORONTO, ON (October 8, 2019) – Holland Bloorview Kids Rehabilitation Hospital (Holland Bloorview), in partnership with Forsman & Bodenfors, launched the Dear Everybody Agreement at the end of August – a movement to build a more inclusive and realistic media landscape that includes people with disabilities – and companies like BMO Financial Group have answered the call to action. To date, 21 industry suppliers and eight brands have signed the Agreement.

“Our purpose is clear. It is to boldly grow the good in business and life and as such, we believe in our responsibility to fairly and accurately represent the communities we service,” said Jennifer Carli, VP North American Brand & Enterprise Content, BMO Financial Group. “We continuously need to be energized by the opportunity to create positive change and the Dear Everybody Agreement is a great vehicle for us to begin acting on this change.”

“With 22 per cent of people living with a disability in Canada, the current representation of disabilities in mainstream advertising is unacceptable,” said Sandra Hawken, president and CEO, Holland Bloorview Foundation. “The Dear Everybody Agreement is challenging the advertising industry to be more inclusive of disability in the picture as part of the fabric of everyday life.”

According to a recent Omnibus survey, 60 per cent cannot recall seeing any representation of disability in advertisements in the last 12 months.

Turns out, a more inclusive approach to advertising is also good business. In fact, 70 per cent of Canadians said that it is important to them that a brand shows diversity in their advertising, including representation of people with disabilities. Encouragingly, almost 60 per cent also said that they are more likely to buy a product or service from a brand that includes diversity.

The absence of inclusive imagery also applies to the entertainment industry. According to recent studies, only 2.7 per cent of characters in the 100 highest-earning movies of 2016 had a disability. Similarly, of the regular characters on prime-time TV in the 2018/2019 season, only 2.1 per cent did.

According to Matt Hassell, chief creative officer at Forsman & Bodenfors, "To truly attack and dismantle a stigma, you have to have a lot of foresight and a lot of humility. It was obvious to us that our partnership with Holland Bloorview would need a groundswell of support and we decided that the typical approach wouldn't be enough and instead focused on creating a coalition to eradicate this stigma around disability. After all, it takes more than a single campaign, it takes an industry."

The general public is also being asked to sign a pledge at deareverybody.ca to support brands that include people with disabilities and demand that other brands take steps to do the same. To date, over 5,400 signatures have been collected.

Holland Bloorview Kids Rehabilitation Hospital creates a world of possibility by supporting children and youth living with disability, medical complexity, illness and injury. Holland Bloorview is a top 40 Canadian research hospital that is fully affiliated with the University of Toronto and serves over 7,500 families annually. Providing both inpatient and outpatient services, Holland Bloorview is renowned for its expertise in partnering with clients and families to provide exceptional care and is the only organization to ever achieve 100 per cent in two successive quality surveys by Accreditation Canada. Holland Bloorview is a founding member of Kids Health Alliance, a network of partners working to create a high quality, consistent and coordinated approach to pediatric health care that is centred around children, youth and their families. For more information or to donate, please visit hollandbloorview.ca or connect on Twitter, Facebook, Instagram, LinkedIn and parent-blog BLOOM.

Forsman & Bodenfors is a global creative collective, founded in Sweden in 1986. Our global network spans across eight offices around the world, with two in Canada (Toronto and Montreal).  Unlike most networks with head offices in New York or London, the Swedish values of democracy and equality are core to who we are as a company. This means we have much more freedom to do what is right for the Canadian market, less financial pressure, and more focus on developing great ideas. It also means our work style is collaborative and human, with our clients involved every step of the way.

For the past two decades we have been ranked as one of the most acclaimed creative agencies around the globe. And in 2018, Fast Company named Forsman & Bodenfors one of the Most Innovative Companies in the world.