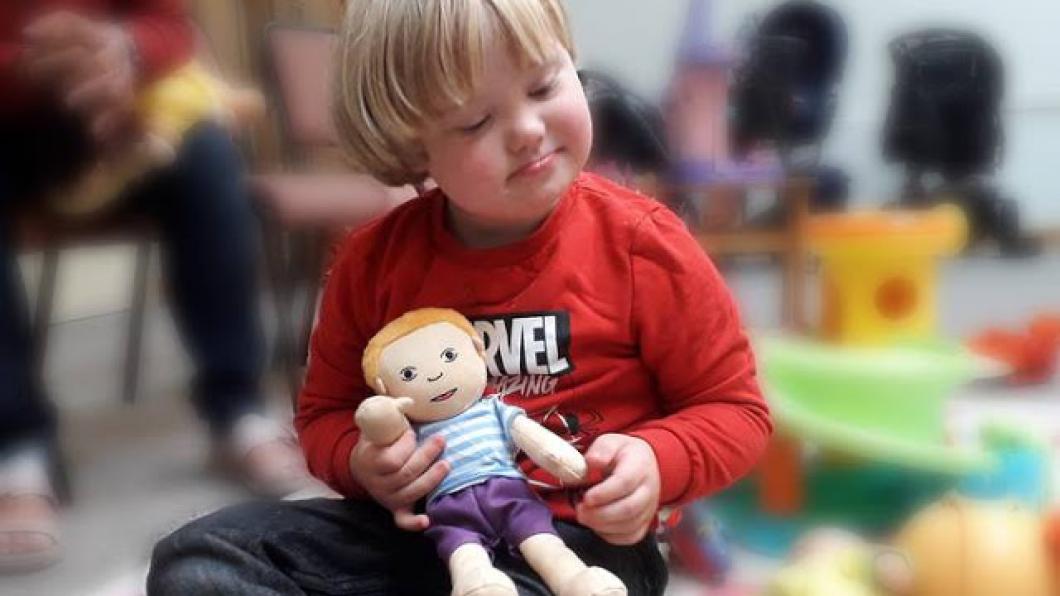 Diverse dolls help children 'appreciate who they are'

Winnie Mak is part of a multicultural family. She is Chinese, from Hong Kong, and her husband Rafael is French and Greek. They live in London, U.K., and after their son Alex, now 4, was born, Winnie learned that the vast majority of dolls were white, girls and able-bodied.

She wanted to create soft dolls targeted to boys and girls that “reflect the diversity of the world.” So she launched One Dear World with four dolls that represent children from Ghana, Mumbai, Norway and Hong Kong. This fall she's adding six new dolls that have disabilities (including the boy doll with Down syndrome, above. Scroll down to see the five others).

“Each doll has an identity and comes with a story, and can be used as a tool to help children build a positive self-image and a respect for each other’s differences,” she says.

BLOOM: Why did you decide to create dolls with disabilities?

Winnie Mak: When I first launched the company I wanted to include all kinds of diversity. But I decided to start with cultural diversity, because I was just one person starting the company at the dining room table.

Last summer my story got featured on BBC, and I got some messages from parents asking for dolls with disabilities. For example, one mother who had a daughter with Down syndrome wanted me to consider creating dolls with Down syndrome. I contacted different charities in London and messaged with parents of children with disabilities through Instagram, and I found them very welcoming to my idea, and willing to have a chat with me. That gave me the confidence to think this was something I should try.

BLOOM: How did you choose which conditions to include?

Winnie Mak: I wanted to show a range of visible and non-visible disabilities. My nephew had been diagnosed with autism, so I had become more knowledgeable about that. There’s a doll with autism, a doll with an amputation, a doll with Down syndrome, a wheelchair user, and dolls with visual and hearing impairment.

I was speaking with a consultant in London who gives advice to big corporations on disability policy, and she mentioned that mental [illness] has been classified as a disability. One of my dolls has anxiety. I think young children should learn about mental health and wellbeing.

BLOOM: How are the disabilities conveyed?

Winnie Mak: The doll with hearing loss has a pink hearing aid. The doll with vision impairment is wearing glasses and has a guiding cane. When I was designing the doll with Down syndrome, I met with some family support groups to get feedback on the facial features. I wanted things to be subtle, not exaggerated.

Each doll comes with a booklet which gives their name, place of birth and a short story about themselves. For example, one doll is Irish and she’s experiencing anxiety after she learns that her parents are getting separated. She finds she likes hiking and drawing, and these two activities give her some peace of mind and help with her anxiety.

Each doll has a hero. The role model of the doll whose right leg was amputated after a car accident is Sudha Chandran, an amputee and also a famous Indian dancer. The booklet also has a section called ‘Do you know?’ about the doll’s disability.

BLOOM: I know Barbie just introduced a black doll who uses a wheelchair, and American Girl has dolls that come with accessories like hearing aids. What makes yours different?

Winnie Mak: What makes my brand unique is that each doll comes with a story, which is a guide for parents or educators to start the conversation about differences. My plan is to develop more stories and content around the doll characters. For example, if I exceed my crowdfunding target, I will write a story that includes all of the dolls, or create a card game that can be played with the dolls. The mission of my company is to nurture future global citizens.

BLOOM: What message do you hope the dolls give children?

Winnie Mak: For children with disabilities, my message is that there are people like them, and they’re not alone. We want all children to grow up having a secure self-image, and appreciating themselves as they are.

I want non-disabled children to learn about disabilities and embrace differences. My son is of the age where he’s very interested in dinosaurs. There are so many dinosaurs and they have difficult to pronounce names, and lots of different features, like running speed. My message is that if young children can learn about all of these complicated dinosaurs, and remember all of the names of the Pokemon monsters, there’s no reason they can’t learn about different disabilities.

BLOOM: How do you make the dolls?

Winnie Mak: I’m not a doll maker myself. I started with some sketches in a notebook and then did a digital drawing on the computer. I’m originally from Hong Kong and used to travel a lot to China when I worked for an electronics manufacturing company. I found a doll-making factory there that is helping me develop the six new dolls.

BLOOM: What ages are they targeted to?

Winnie Mak: Because they are cuddly and soft, they are targeted to children from one to two years old, up to five to six years old.

BLOOM: What do the dolls cost?

Winnie Mak: The new dolls will cost between $40 and $50, because they are more detailed than my first dolls, and more resources were put into developing the booklets that come with them. For each doll sold, 10 per cent of sales will go back to a charity that supports that particular disability. For example, the dolls with visual impairment will support Sightsavers. They work in some of the poorest parts of the world to prevent avoidable blindness and to promote disability rights.

Winnie’s new dolls will be launched in early September through a crowdfunding campaign. You can sign up for more information here. They will be shipped internationally. The wheelchair below comes separately, and can be used for play with any of the dolls.