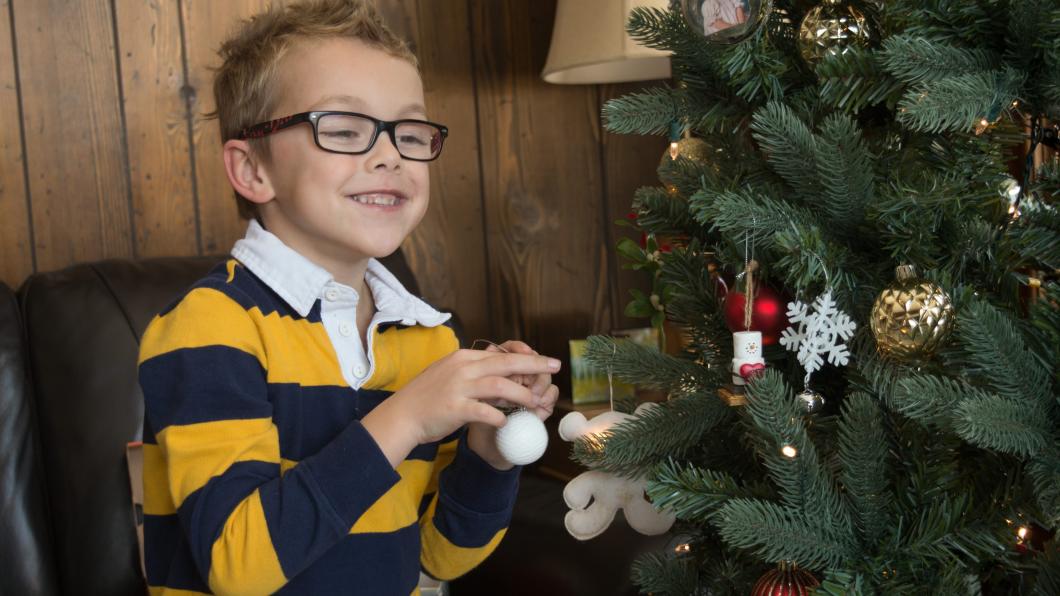 This winter baby likes to celebrate in style

From parades to parties, from icing cookies to decorating the tree, for Alex, the holidays are about celebrating the season with his friends and family, and doing it in style. With a love of collared shirts and bow ties, Alex always attends his family’s Christmas celebrations—and there are a lot of them—in his Sunday best.

His parents, on the other hand, love the holidays because of spirit of giving everyone embraces. One family get-together truly represents that in their eyes.

“Instead of exchanging gifts, everyone brings $10, puts it into an envelope and writes a charity or foundation they want to support on the front,” Alex’s mom Sarah explains. “Then three envelopes are pulled and the money is split amongst the winners to give to the recipient of their choices.”

Last year, all of the money raised at the family gathering—totaling more than $400—was donated to the physiotherapy clinic Alex attends.

Before he was two, Alex was diagnosed with cerebral palsy (CP).

This past year he was approved as a candidate for a Selective Dorsal Rhizotomy. The program is a joint initiative between Holland Bloorview and SickKids. It is the only one offered in Ontario and the third of its kind in Canada.

Post-surgery, Alex spent three months recovering at Holland Bloorview.  From exercising in the pool to visits with the therapeutic clowns, Alex found both physical and recreational activities to help him through his rehabilitation journey.

He did it all with a smile on his face and an attitude of fierce determination.

A week post-surgery, he took his first steps.

“He was just beaming,” Sarah says.  “None of us expected him to do that so quickly after the surgery. He’d spent a week in bed or sitting in his wheelchair, but with his physiotherapist and occupational therapist cheering him on he wanted to try, and it was just amazing to see how excited he was!”

While Sarah acknowledges how comforting the donor-funded sleeper chairs were, allowing her to stay by her son’s side throughout the night, comfort was also found within the secondary family they created at Holland Bloorview.

“They gave us total support: every day, for three months. We became a family within our room and with the other people on the floor. The staff gave us the medical and physical support that Alex needed, but they, along with everyone else in our make-shift family, gave us vital emotional support” she says.

“The nursing staff, the doctors, therapists, social workers and even the lifeguards, everyone was there for us no matter what support we needed.”

It was during his recovery period that Alex met and became best friends with his roommate Carson.  Since coming home, both boys play on the same sledge hockey team and their moms touch base often, to seek advice, give support or just to chat.

“We wouldn’t have survived without each other,” Sarah says.

So while Alex gets along quite well with his little sister, he now also has gained a brother.

If you ask Sarah to what she’d want everyone to know about Alex she would say, besides his sense of humour, that he’s never let his CP stop him or slow him down.

“We’ve made accommodations as needed, but overall we just try to stay positive and encourage him to try anything and everything,” she says.  “We’ve never really let the diagnosis stop us from doing anything, ever.”

And Alex truly lives up to this.

Just four months after the surgery, Alex completed a one-kilometre fundraising walk, without his crutches, a walker, or needing to hold anyone’s hands for support.

“Pre-surgery, we’d be lucky to get to the end of the driveway without him tripping or falling,” Sarah says.

“I don’t think he planned on doing the entire walk independently, but he just kept going and he didn’t reach out for any of us, and before he knew it he was crossing the finish line.  He did the whole thing himself.”

And he did it in a Flash costume to boot.