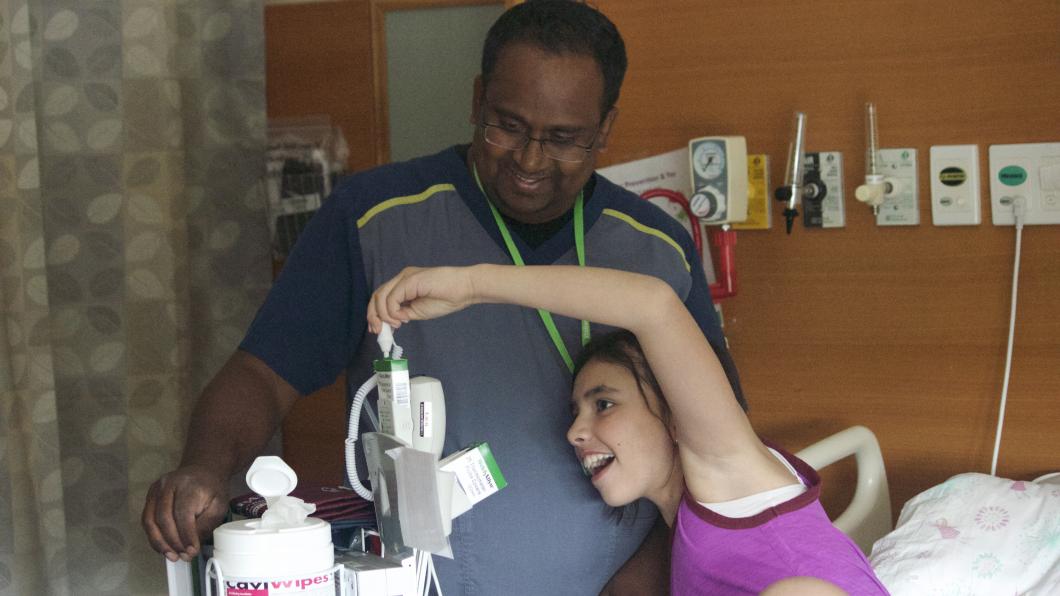 'I love watching kids grow and develop and change with rehab'

Randy Dindial is a registered practical nurse on Holland Bloorview’s brain injury unit. He works with children between the ages of six months and 18 years. Here's how one parent described him:  “[Randy] looked after my daughter as his own.  He was so gentle with her and made sure she got everything on time—feeds and meds.” Randy has been here ever since he graduated from college 17 years ago.

Randy Dindial: I started my career at Holland Bloorview. I had heard other peers at college talk about Bloorview, and what a great place it was. I love kids. I love watching kids grow and develop and change with rehab. Looking back, some of the kids come in needing total care. They can’t walk or talk, and [use ventilators]. Then they leave here walking, and starting to talk and eat again. Those are amazing stories.

BLOOM: You’re working with children who have often acquired their disabilities through trauma. That must be difficult.

Randy Dindial: The kids make it easier. They don’t reflect on what they were before the injury. They’re looking at today and tomorrow. They’re always hopeful that they’re getting better, and are happy with what they’re regaining. That makes it easier for me as a caregiver.

BLOOM: How did you choose nursing?

Randy Dindial: I had family members that were nurses—my cousin and my aunt—so I had a good sense of what nursing was about. Looking at myself as an individual who is caring and soft, I thought it would suit me. I love coming here to Bloorview. I especially like working here on Christmas day or New Year’s, because we try to make things fun for the kids.

BLOOM: You told me you mainly work nights now.

Randy Dindial: Yes. For about 13 years I did mostly days. But now I have a small son, so I switched to nights. My son is five, and I like being there more for him. I can be more involved in the morning in dropping him at school and then picking him up, which means a lot. I appreciate having that time with him.

BLOOM: What tasks do you do on the night shift?

Randy Dindial: We’re maintaining kids that need to be fed by tube overnight, and making sure they’re stable. We administer medications. We may play card games with them to stimulate their memory, or encourage them with practical things like eating and dressing. Sometimes parents aren’t around because they have kids at home as well, so we may be comforting and trying to settle the little kids.

BLOOM: Because kids may struggle to sleep after a brain injury?

Randy Dindial: Most definitely. We may be rocking a little baby to sleep.

BLOOM: What’s the greatest challenge of the job?

Randy Dindial: We try to accommodate every family’s wish. Most want to stay longer to continue to receive therapy here. It’s explaining to them that therapy continues in the home, and not just with a therapist. Things the child can do with their siblings, like playing together, are beneficial.

Sometimes we see children who are here because of non-accidental injuries.

BLOOM:  Children who have been abused.

Randy Dindial: That’s hard. When the Children’s Aid Society is involved, and there are restrictions on parent visits, it seems like the child is the one that’s suffering.

BLOOM: How do you cope emotionally with those situations?

Randy Dindial: We have a great team of peers supporting each other on the floor. It helps to talk about stuff like that—things that bother you. We all go through the same emotions and feelings, and talking about it goes a long way.

BLOOM: What’s the greatest joy of the job?

Randy Dindial: Being a part of these kids’ lives, and watching them grow for the months that they’re here. They trust us. They look up to us as individuals, and we get to know them as individuals.

BLOOM: I remember when we did a narrative training program with our inpatient nurses, a number of nurses spoke about how hard it was when they were on the receiving end of parent anger and grief.

Randy Dindial: It doesn’t happen a lot. When it does, you listen to the family, and give them time and room to voice what they’re feeling, and try to stay calm. You try to imagine what the family is going through, what it would be like if this was your child. They often come back to visit, and sometimes, when they do, they seem like a totally different person. So when you have difficult interactions, you know it’s just the stress of it all.

BLOOM: If you could change one thing about children’s rehab, what would it be?

Randy Dindial: I would change the rule that says only one parent is able to stay at the child's bedside overnight. Last summer, my son was hospitalized for a week at SickKids, and I saw how hard it was to choose which parent would stay, when both want to be there.

We want to keep the family unit together, and often parents have given up their jobs to be with their kids, because their work won’t give them the time off. We’ve come such a long way with removing restrictions on visiting hours and cell phone use. Being together makes the whole hospital experience less stressful. It would be nice if both parents could stay. We could also look at allowing parents to sleep in the same bed as their child. That’s what parents do at home to comfort their child, and we should try to encourage the same routines here.

BLOOM: If you could give yourself advice on your first day, from where you sit now, what would you say?

Randy Dindial: I was nervous back then, because I didn’t know what to expect. I would tell myself that it’s going to be a great road, with a great organization. The people here are great, and the kids are great. Be patient, and enjoy the ride.

BLOOM: What is it about the staff here that you value?

Randy Dindial: Just how calm everyone is, and how caring. I personally have learned from my peers and from others, in other disciplines. I think we have great people here.